7 min read
*Affiliate disclosure: I may receive commissions if you buy via the links below. As an Amazon Associate, I earn from qualifying purchases.
31 shares

Fear is natural. It’s a basic biological response essential to our self-preservation. At least that’s what I keep telling myself as I climb the 400 steep, narrow steps of Moro Rock, a granite dome in Sequoia National Park whose summit reaches 6,725 feet elevation. 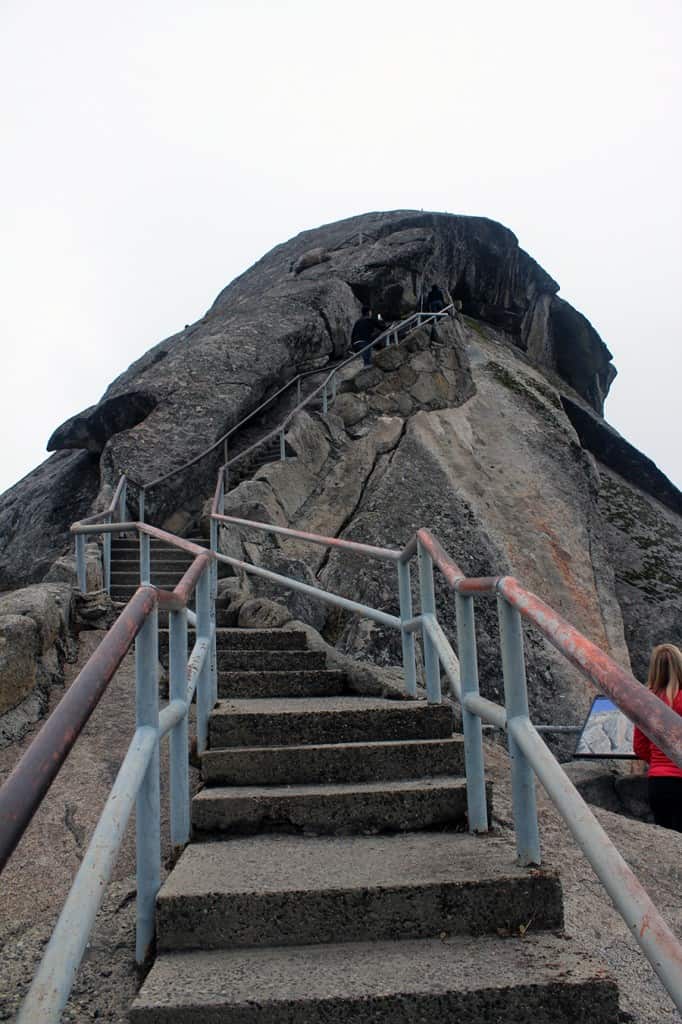 Right now, the only thing preventing a full-blown panic attack is the fact that two of my friends are with me.

With shaking hands, I hold tight to the cold, metal railing to steady myself. Each step reminds me of the recurring nightmares I have about falling. Sometimes I’m in a car, wobbling to and fro on a bridge that’s too narrow for the entire width of the car to fit on. Other times I’m clinging to a rooftop of a building in a big city. Every time, what lingers long after I wake from the dream is the sensation in my stomach, the feeling of falling as I teetered at the edge of the abyss.

Basically, this climb is the materialization of my worst nightmares.

Now there are all sorts of people climbing these stairs with me: elderly couples and families with small children, but as far as I can tell, no one is nearly as afraid as I am. I stare at them in wonder; it’s as though their reality is different from mine. Are we not on the same narrow staircase hundreds of feet in the air? 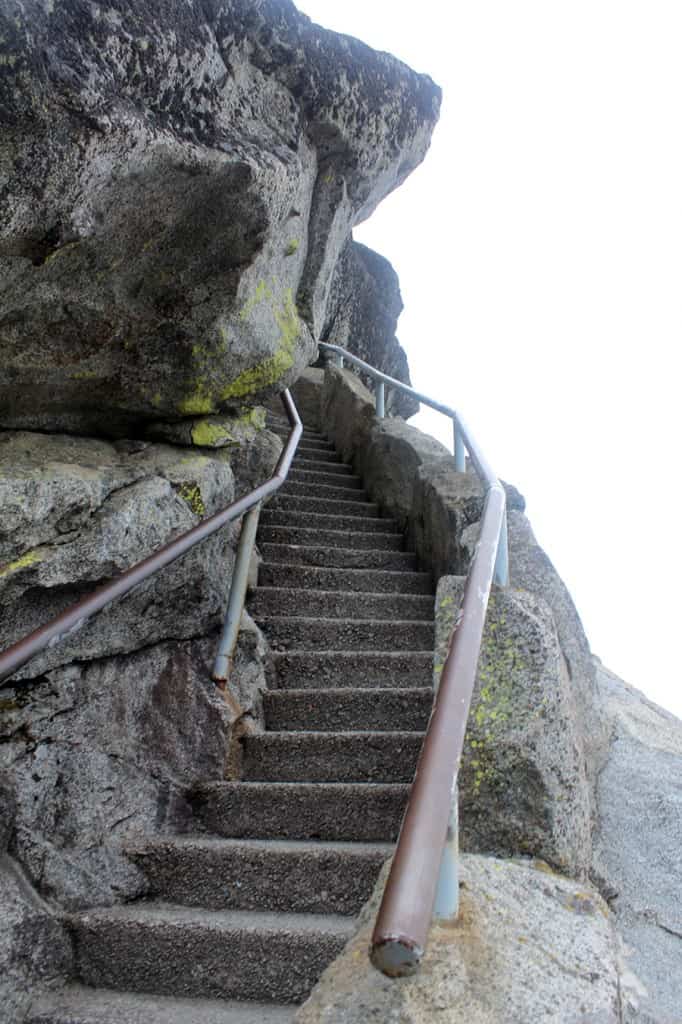 As I get higher, I try to ignore the tingling in my hands, the tightness in my throat, the pounding in my chest, the spots in my vision. I don’t want to chicken out in front of everyone, so I continue onward and upward, every so often stealing a glance to my left at all that space between me and the valley below. 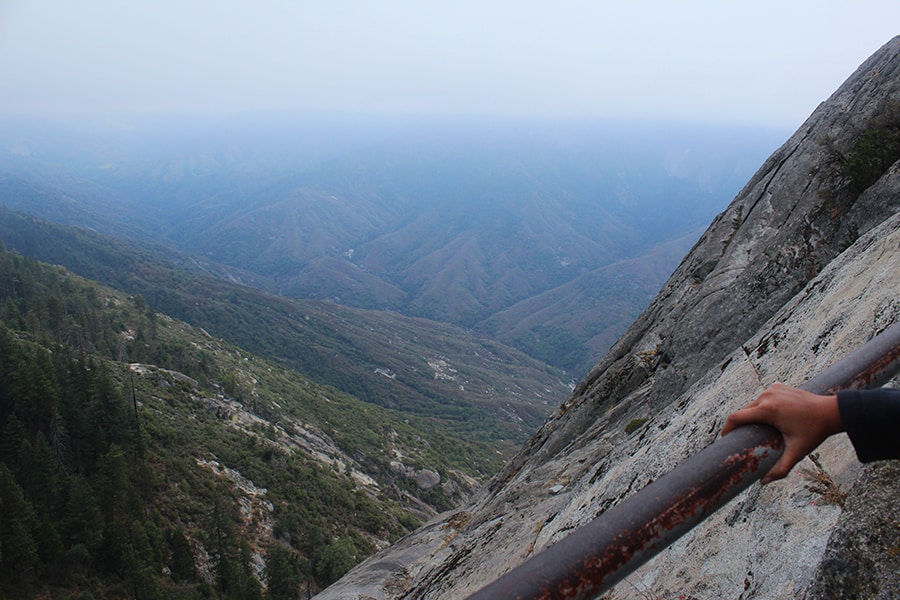 When I’m about one-third of the way up, one friend is so far ahead I can no longer see him, and then my other friend bows out. She heads back down the steps, but I continue, driven by curiosity and pride.

At one point, the wall of rock to my right presses in closer and slants above me, narrowing the path and forcing me to duck beneath it and move closer to my left where the cliff is. At another section, there’s no metal railing at all–just large rocks stacked to form a pathetic, low wall.

Then I reach a puzzling part of the climb: It looks like the staircase just ends. But I know there were people ahead of me. Where did they go? Panic sets in.

Then I realize it’s just a sharp bend to the right, so it looks as though the path ends, but it doesn’t.  Before continuing, I look around. I can’t see anyone. I am alone.

I call out to my friend. No answer. I start breathing faster, but I feel like I can’t breathe fast enough. My head is spinning. I cannot get over the fear that all it would take is a push, a nudge even, and I would plummet hundreds of feet to my death. 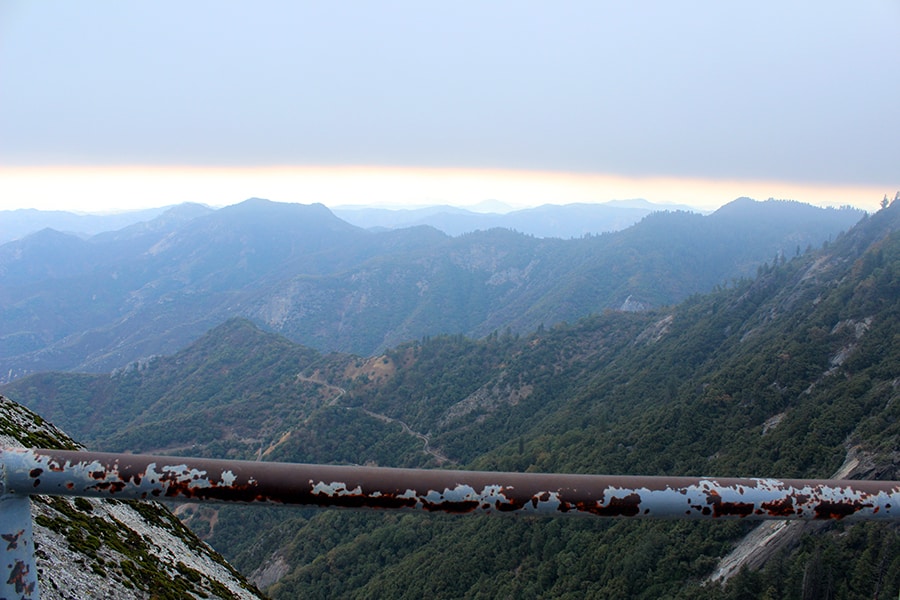 It is that fear that forces me to turn around.

I find my friend near the bottom of the stairs and tell her how disappointed I am.

“Why do you need to get to the top?” she asks. She gestures to the view behind us. “It’s already gorgeous right here. How much better can it be at the top?”

But it’s not so much that I want to see the view from the summit–it’s that I don’t want my fear to win.

So I try again, this time leaving my camera with my friend. I feel so unsteady climbing the steps, that even having my DSLR hanging at my side makes me feel like I’m going to fall over.

About three-quarters of the way up, I run into my friend, who’s on his way down from the summit.

“I…can’t…do this,” I squeeze out between gasps for air.

When we finally step out at the top of Moro Rock, there is cliff on both sides of us. I freeze in place.

“Yeah,” I choke out, too stiff to take another step forward.

I watch people walk all the way to the edge of the rock, where there is cliff to your left and right and in front of you.

“I have to walk all the way to the edge,” I tell him. I have to do it simply because I am so afraid to.

When I get there, I allow myself to relax for a few seconds and take it all in.

From the top of Moro Rock, you get a 360-degree view of the lush trees of the Giant Forest blanketing the valley below and the mountains of the Great Western Divide in the distance.  At this time, the sun is setting. Sandwiched between the tops of the mountains and the layer of dark gray clouds above them is a colorful section of sky that fades from pink, to orange, and then to light blue, like a rainbow that stretches in a straight line across the horizon.

Once I snap out of my reverie, I hurry back down the steps, not at all in a graceful way. I crouch down behind him, pushing my body as closely as possible to the side opposite the cliff, hands sprawled out on the granite rock, clinging for dear life.

Halfway down, we pass a family heading up the rock. Their 6-year-old daughter is playfully skipping up the stairs, not even bothering to hold on to the rails.

I glare at him because I’m so embarrassed. I want to say something searing and witty, but I am too scared out of my freaking mind to think.

When we get to the bottom of the stairs, I resist the urge to kiss the ground.

I made it. Even though I scratched, clawed, squealed, and hyperventilated, I did it. And it was one heck of a view.

Yes, fear is natural, but imagine all the beauty we’d miss out on if we let fear dictate our actions.

When to go: It’s open year-round,  but in the winter the steps can be covered in snow. You should definitely, definitely go at sunset! The lighting is incredible then. Also, if there’s ever a meteor shower, the top of Moro Rock is probably one of the most spectacular places to watch it–if you’re not too afraid to climb the 400 steps at night.