How to Use the Paris Metro (Step-by-Step With PHOTOS)

6 min read
*Affiliate disclosure: I may receive commissions if you buy via the links below. As an Amazon Associate, I earn from qualifying purchases.
7552 shares

The Paris Metro (subway) system is wonderfully organized and well connected. You’re never far from a station, and you usually won’t wait more than five minutes for the next train. Even so, if you’re new to the City of Light, it’s helpful to have a guide on how to use the Paris Metro.

For a major city’s public transit, the Metro is relatively clean and safe. Sometimes you even get the occasional singer-songwriter playing guitar on the train, or a guy breaking it down on the saxophone, or if you’re really lucky, that one lady who drags an entire karaoke machine onto the train so she can serenade you in Spanish.

Anyway, riding the Paris Metro for the first time can be confusing, so I’ll detail each step for you below.

*Disclosure: I earn a commission if you choose to purchase after clicking any of my affiliate links below (at no extra cost to you).

Which Metro station you enter depends on where you want to go. There are 14 Metro lines in Paris, each assigned a color and number. Some stations connect to the RER (high-speed trains that travel farther out of the city limits), which is completely different.

The easiest way to know which Metro station you need to go to is to download the official RATP app and/or the Next Stop Paris app.  These are great because they’ll calculate travel time, alternate transit routes, and even tell you if there are delays. Alternatively, you can use Google Maps or look up the Paris Metro maps on the RATP website.

On the street, you can locate the Paris Metro stations by red signs that say “Metro.”

Or yellow and green signs that say “Metropolitain.” You then descend the staircase.

TIP: To avoid being uncomfortably crammed onto a train, avoid rush hour times, which are roughly  7-9am and 5-7pm.

Once below, you’ll see automated machines and/or a ticket booth window with an employee. 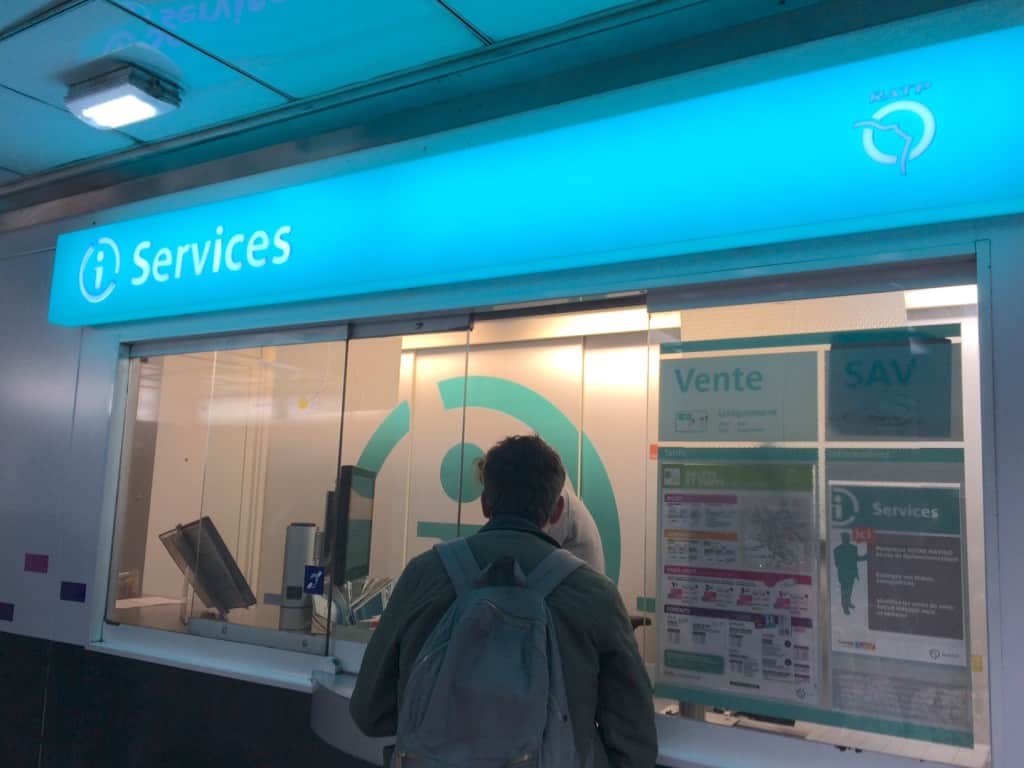 If your French is not so good, you can use the machines, which give you an English option. (You could also invest in a French phrasebook for your trip.) 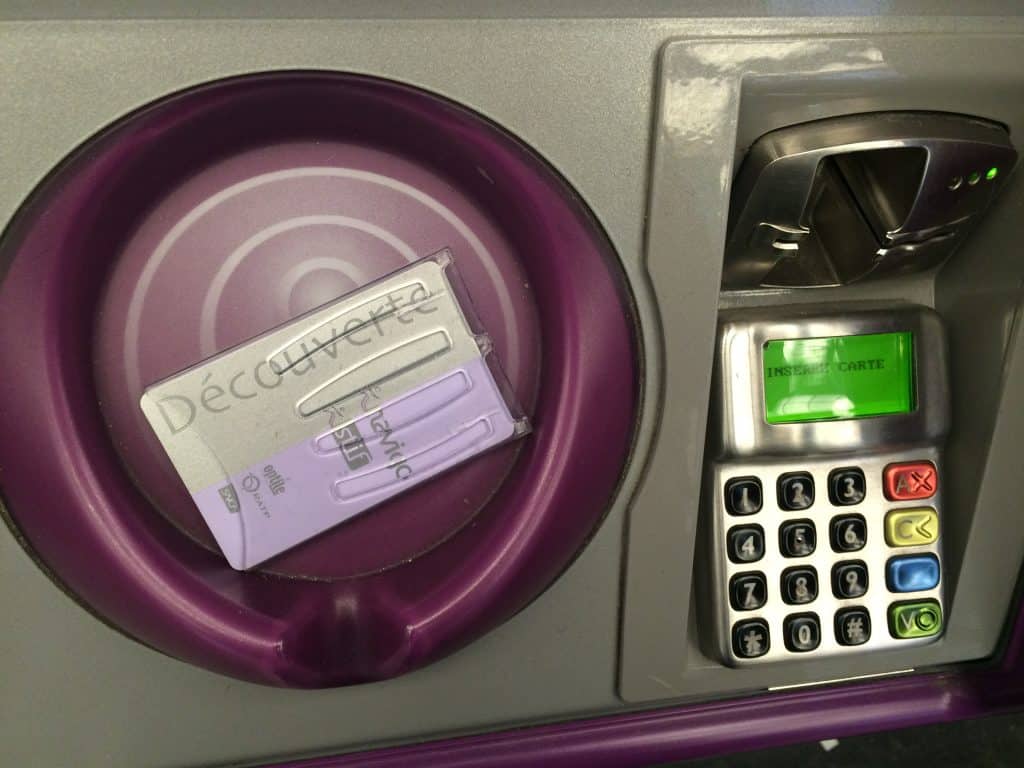 For details on all the different ticket and pass types, visit the RATP travel tickets page.

Step 3: Place your ticket/pass into the turnstile machines

If you have a ticket, place the little rectangle paper into the slot at the front of the machine (doesn’t matter which side you turn the ticket). The ticket will pass through and pop up at the top of the machine. Take your ticket, and walk through the turnstile. TIP: Do this quickly! If you wait too long, the ticket will time out and you won’t be able to walk through the turnstile.

If you have a Navigo pass, simply touch it to the top of the turnstile on the purple plastic part that says “Navigo.” The machine will beep and you can walk through the turnstile.  TIP: If you tag on with Navigo, enter the turnstile, and then walk back out for whatever reason, and then try to tag on again, it WILL NOT let you. So don’t do this…or if you do, walk to another station and try to tag on there.

TIP: HOLD ONTO your ticket or Navigo pass. There are random fare checkers, RATP employees, who may board your train and ask to see proof of payment. You simply show them your ticket, or if you have a Navigo, touch the card to their handheld scanner device.

Step 4: Follow the signs to the correct Metro line and train

Once you’re past the gates, look around. There will be signs with metro line colors and numbers. The signs will have maps of the stations each line stops at. Look for your station. There are two directions for each Metro line to head in. The name of the direction will be whichever stop is the very last on the line in that direction. So look at the map, see where your destination station is, and then look for the name of the last stop on that map. Head to that Metro. Just follow the signs.

When you get to the tracks, you will see a lit-up sign overhead. This tells you how many minutes until your train arrives. 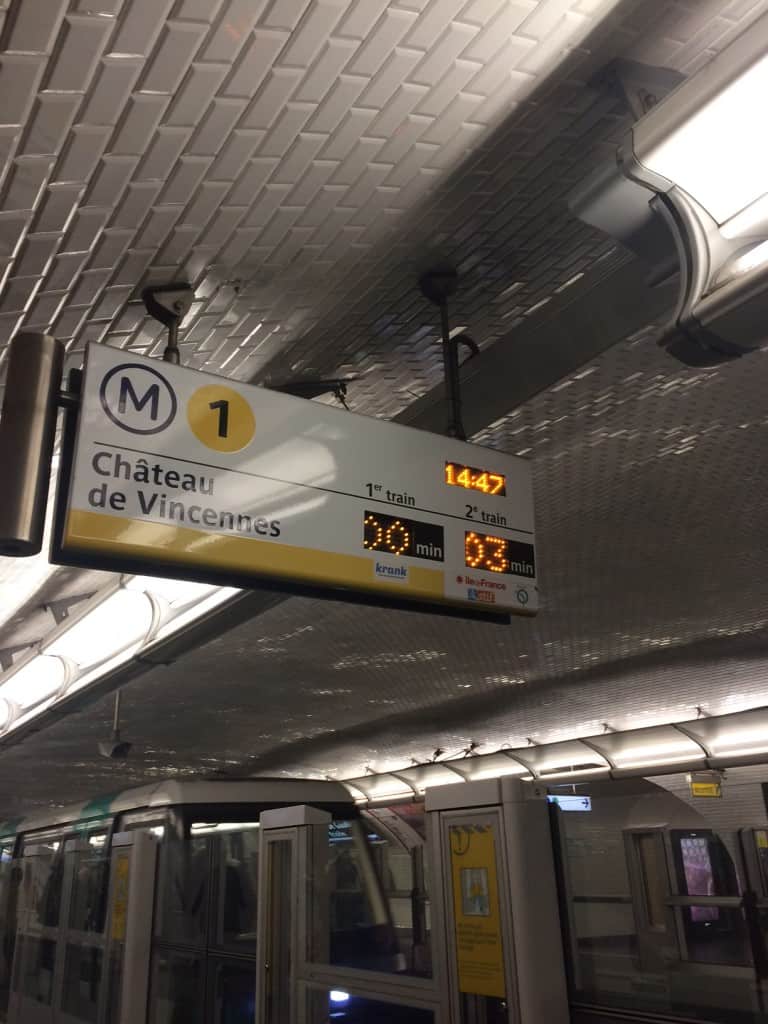 TIP: The Metro in Paris is notorious for being a thieve’s favorite place to target tourists, so BE AWARE of your surroundings at all times. Clutch your bag/backpack close to you and watch out for anyone rubbing up closely against you or trying to distract you by dropping things.

Step 5: Board the train

You can either sit down or stand. If you stand, hold onto the rail or the little handles overhead so you don’t fall over. There are little fold-down seats right next to the Metro doors. Do not fold down and sit in these during very crowded times on the Metro.

On the Metro, Parisians generally don’t make eye contact, talk to strangers, or talk loudly on the phone. If you don’t want to stand out, do as the Parisians do.

Step 6: Watch for your stop

An automated voice tells you which stop is coming up next. You can also look at the maps above the doors. They often also have lights that light up on each stop. 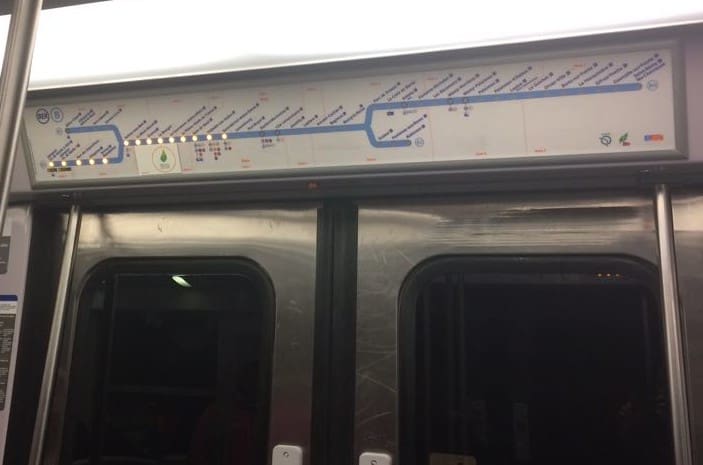 TIP: If you don’t know French and are listening for station names, just realize you may completely miss your stop if you don’t know the French pronunciation of it. For example, one Paris station is called “Franklin Roosevelt,” which sounds nothing like the way Americans pronounce it. It’s best if you keep your eyes on the map and glance outside to see the station names, which are on signs throughout the station.

When the train comes to a stop, there are two ways to open the door if it does not open automatically

1) A green button, which you push

2) A metal handle, which you PULL UP

If someone is in your way when you are trying to move along or exit the Metro, say “Pardon” (in French, that is pronounced “Pah-dohn”). Here’s a page where you can listen to audio of French speakers pronouncing the word: http://forvo.com/word/pardon/#fr

When you exit the train, look for a sign that says “Sortie,” which means “exit.”

There will be multiple exits, with numbers and names of streets or landmarks. 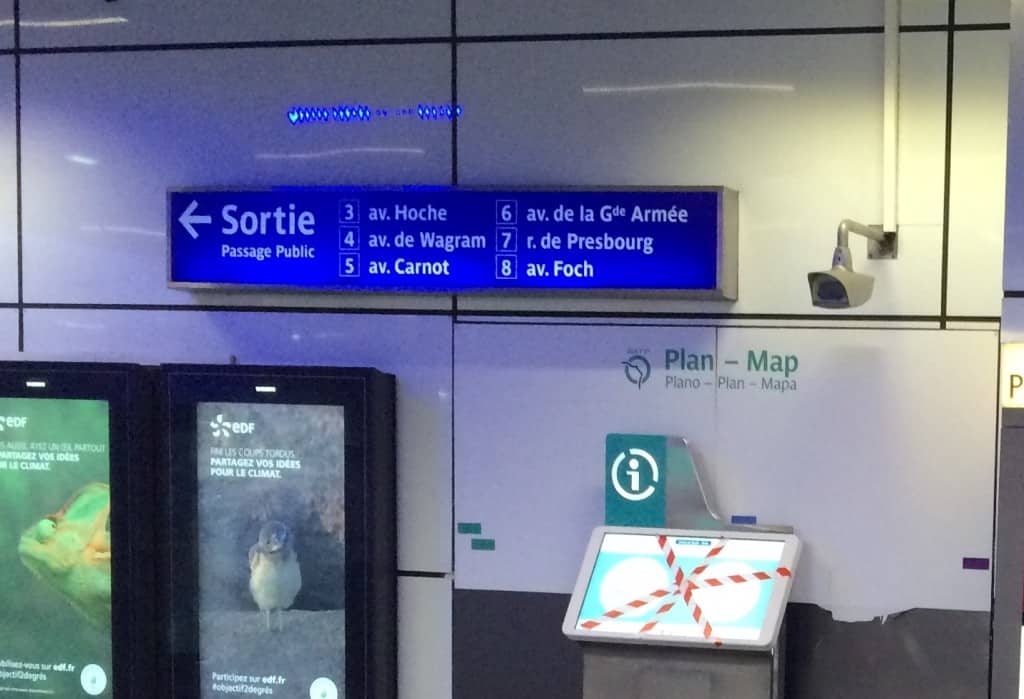 Exit at whichever street or landmark your destination is closest to. If you don’t exit at the correct sortie, don’t worry! All the exits are close to each other, so you’re not going to be way off track.

Looking for a good French phrasebook to pack for Paris? My favorite is this one.

Be sure to check out my guide on how to buy Paris Metro tickets!