8 min read
*Affiliate disclosure: I may receive commissions if you buy via the links below. As an Amazon Associate, I earn from qualifying purchases.
16 shares

My first thought when I see the NASA Ames Visitor Center is, “This is it?”

I am standing in an empty parking lot just outside the gate to Moffett Field, where it looks like someone haphazardly pitched a big, white tent and slapped a NASA logo on it. 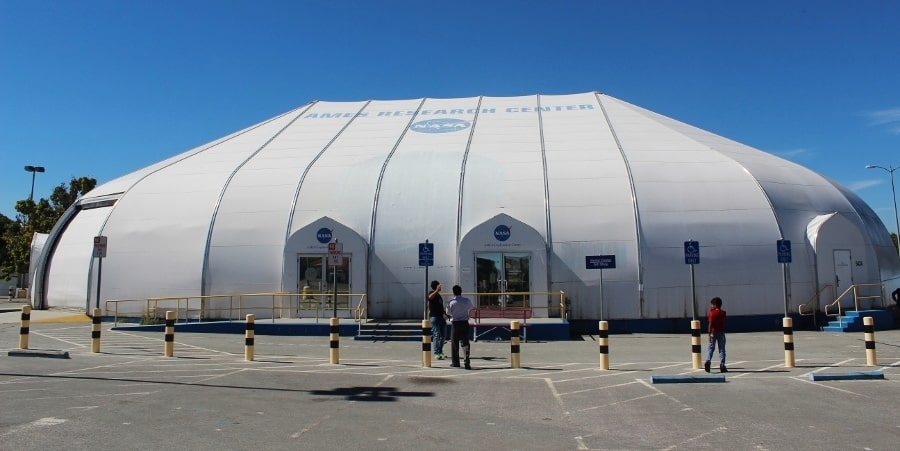 But, as we all know, looks can be deceiving.

When my friends and I walk inside the dimly lit tent, I wonder out loud, “Why’s it so dark in here?”

“We like it dark,” says an employee who seems to materialize out of the shadows.

Another employee introduces himself (we’ll call him “M”) and then tells us he’s training his new coworker and that we should ask him as many questions as possible to trip him up. Challenge accepted.

I peer through the darkness at the exhibits around me. The place is small; I judge that it can’t take more than an hour to see it all.

Exploring the Surface of the Moon

The only other people here are families with small children; my friends and I are all above the age of 22.

Two small children watch us as they wait for their turn to pose as astronauts. We take our sweet time.

Next to the astronaut cardboard cutouts is an exhibit that lets you explore the moon. I love the moon. I practically shove my friend aside in my eagerness to take over the controls.

Living Aboard the Space Station

I’m in the middle of exploring a deep lunar crater when Cindy runs up to me.

“We found food!” she shouts.

I drop everything because if there’s anything I love more than the moon, it’s food. She leads me into a space station mock-up. 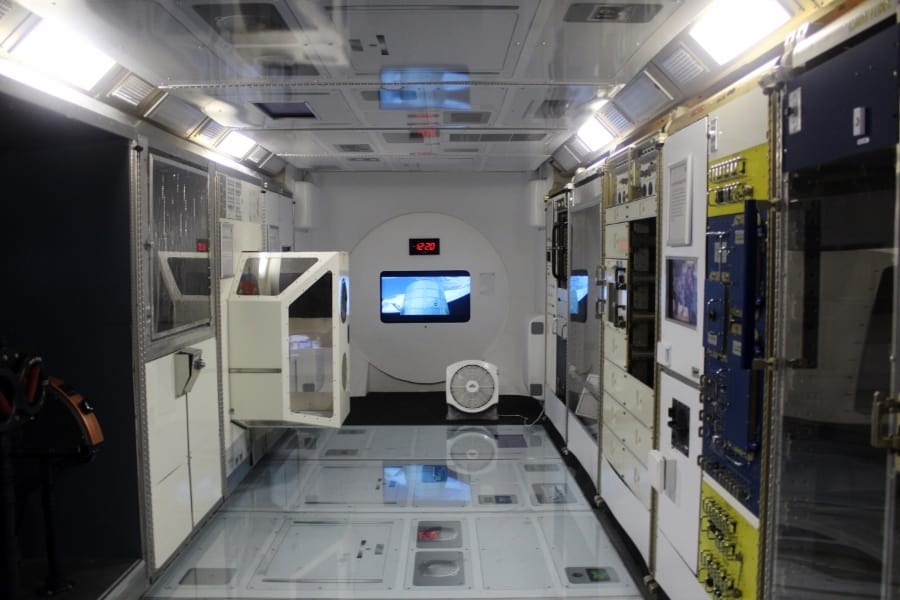 Unfortunately, the food is behind a plastic wall, and it doesn’t look too appetizing anyway. 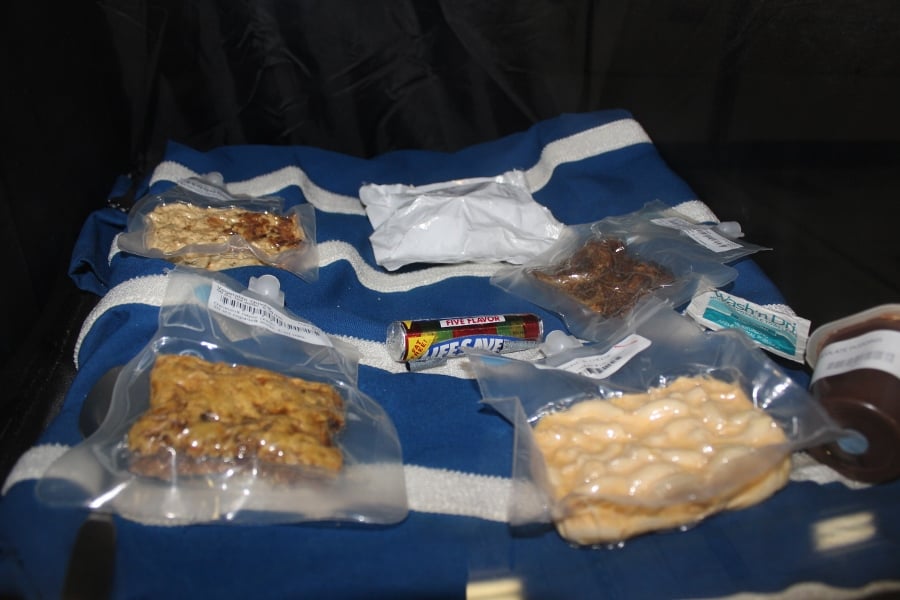 I’m a tactile person. Anything I see must be touched to complete the experience. So when I see “Adult Frog Box Compartment,” I reach for the tiny knob beneath it. It pops off. Convinced I’ve broken it, I frantically start trying to screw it back in.

“Maybe it’s supposed to come out,” Krissa suggests. So then we break off ALL the knobs and slide the compartment out. Much to our chagrin, there is no frog inside.

M stops by, and Krissa and I step away from the compartment and pretend nothing happened. He sees I’m taking pictures and offers to shut off the lights because “it looks so much cooler.” And heck, it does.

We step out of the space station, and I run into the new guy (sorry, new guy, I don’t remember your name).

“If you’re interested, we’re about to do a presentation on what it’s like to live on the ISS,” he says.

“Um, I just came from a space station,” I inform him. “So…I kinda already know what it’s like living on it.”

“Oh? Then maybe you’d like to give the presentation instead?”

I smile nervously and walk away just in case he’s serious.

Pretending to Be Charles Bolden

We’re exploring the rest of the museum when a huge, floating Jupiter catches my eye. 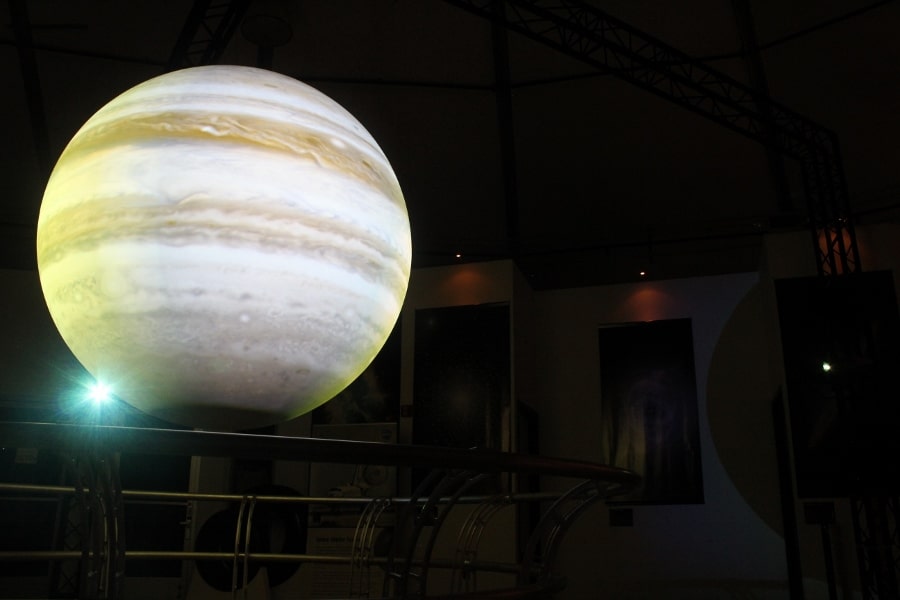 Ever-attentive, M approaches me and says, “If you’d like, we can change it to any planet you want.”

“Well,” I challenge him. “If you change it to Saturn, is there any way to depict the rings? Maybe have a hologram of them?”

“We actually have been working on making that happen,” he tells me. “But basically, there’s no way to set it up where people won’t accidentally walk in front of it or mess it up.”

His colleague-in-training stands a few feet behind us, trying to figure out how to turn Jupiter into Saturn. In his hands he holds an iPad that controls what planet appears next on the giant orb. I stare at in awe.

He pulls it away. “NASA employees only,” he chides.

He laughs. “I saw Charlie last week. You’re definitely not him.”

M then tells me he spoke to Charlie while working crowd control at a Venus transit event last year.

Now I’m no longer jealous that they get to hold the all-powerful iPad controlling the planets, but they’re also on a first-name basis with the NASA Administrator.

Seeing a Piece of Moon Rock

It is now time to see the famous Moon Rock everyone keeps telling me is the highlight of the NASA Ames Visitor Center. I’m a little deflated when I find out it looks just like any other rock: small, gray, and jagged. 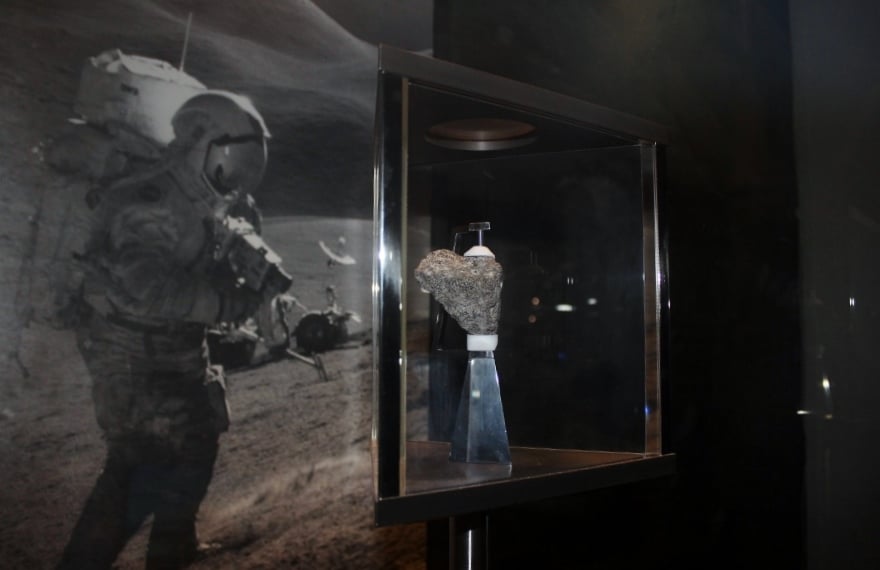 M informs me that NASA Ames has several pounds of the moon rock in storage, just in case something happens to the piece on display.

As I make my way out of the Moon Rock room, I spot something atrocious and offensive: 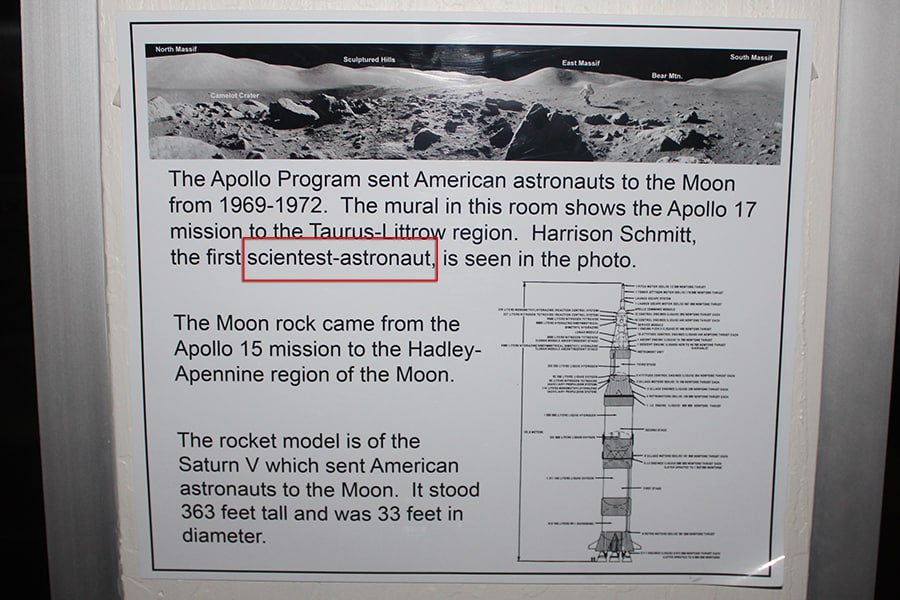 “Oh yeah,” he says with a shrug. “I noticed that years ago.” He then explains that he already notified the curator and managers, but to no avail.

In the next room is a replica of the cockpit of a space shuttle.

M is in the middle of telling us about the intense training astronauts must undergo when he stops suddenly and looks over at the cockpit, which is making all sorts of weird noises.

“Someone better take the controls before we crash,” M says matter-of-factly, and then walks out.

My crew needs me. With heart pounding, I take the seat behind hundreds of knobs, toggles, and buttons. I have no clue what’s what, so I do what any sensible person would do in this situation: I slap my hands all over the place and turn everything on and off as quickly as possible.

The alarm sounds. We’re going down.

I continue to press every button I can find. Thankfully, Angela steps in for backup. Eventually, the alarm stops, and it appears to be smooth flying from there.

Excited to catch a glimpse outside the cockpit, I look out of our “window,” which is really just a TV monitor. It’s black, which I guess is a pretty accurate portrayal of space.

After a close call with almost wrecking the space shuttle, I decide to do something a little more relaxing: build a solar system. A sign above the screen challenges me with these words: “Can You Create a Stable Planetary System?” 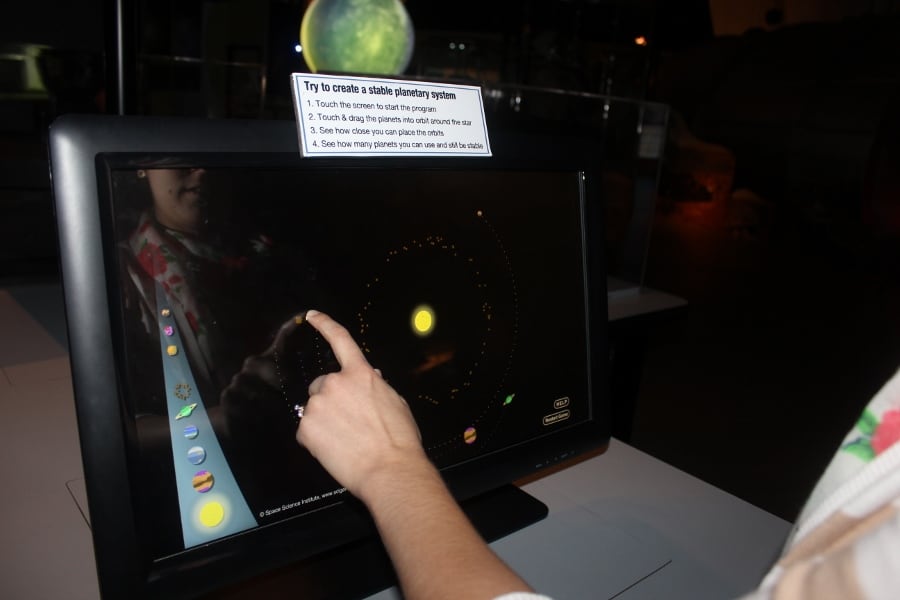 Well, stability has never been my specialty, but I decide to give it a try anyway. I drag one planet and drop it on top of another, which sends them both spiraling out of control. I let out a maniacal laugh.

Drunk on my newfound power and eager to see more destruction, I drag two suns into the center of the solar system and then watch as it collapses, bit by bit, planets devouring planets, other planets flying out of orbit and getting lost in space. Cue more maniacal laughter.

In my brain, I begin to philosophize that perhaps this says something about power and entropy, but then I become distracted by yet another reason I came here…

Now for the REAL reason I came to NASA Ames: to buy tax-free astronaut ice cream from its gift shop. 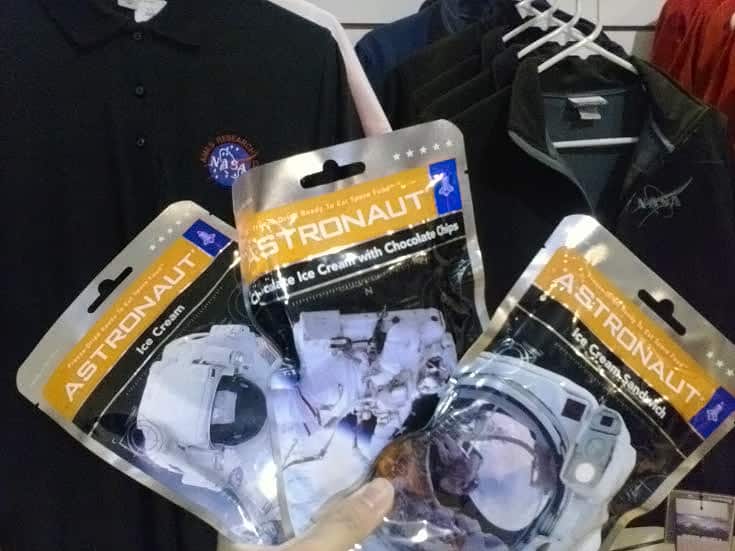 For those of you who have never known the joy that is astronaut ice cream, allow me to explain. It’s not cold; it’s not even frozen. The ice cream is freeze-dried, resulting in a delightfully chalky, powdery sweetness. You have to try it. (I just realized “chalky” doesn’t sound tasty.)

While I’m at it, I get sucked in to buying other cool NASA stuff. I find the mission patch to my first (and only) shuttle launch: STS-131. I decide not to buy it. But I do buy a NASA USB car charger because it’s practical, and I’m going to use it all the time, so totally NOT a waste of money!

By the time I walk out of the gift shop, I realize we’ve spent two hours at Ames. Where did all the time go?

As it is with every encounter with NASA, I leave the Ames Visitor Center confident I can conquer anything. After all, I have just lived aboard the space station, controlled the movements of the moon, piloted a shuttle into space, and created my own solar system.

Oh, and the astronaut ice cream? Devoured it all that night.

Location: Just outside Moffett Field in California. Pretty much the city of Mountain View

Parking: Free. You DO NOT need to go past the security gate. The parking lot is before that, and there’s no need to check in anywhere.