5 min read
*Affiliate disclosure: I may receive commissions if you buy via the links below. As an Amazon Associate, I earn from qualifying purchases.
5 shares 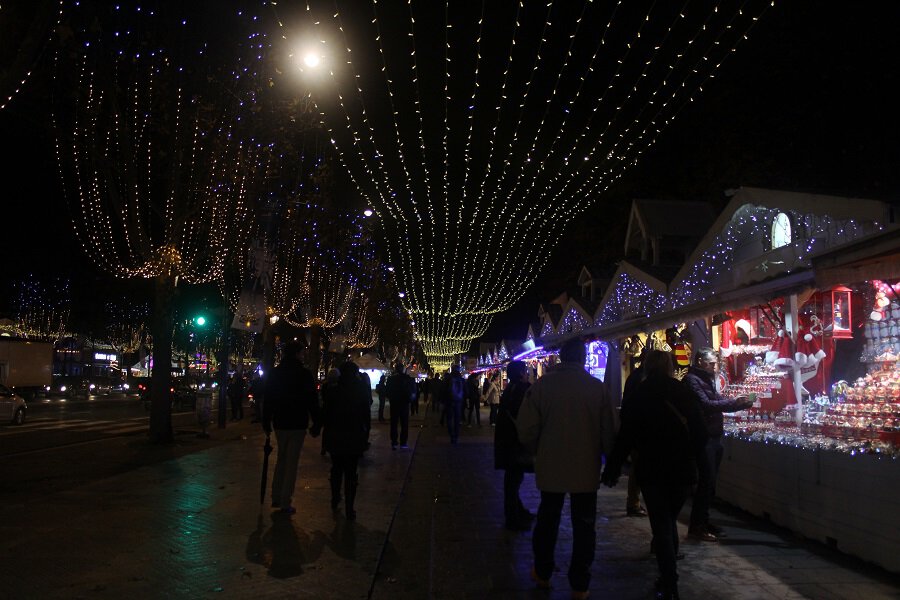 While countries like Germany and Austria are better known for their markets, don’t let that fool you. Strasbourg, France, was actually voted the #1 Christmas market in 2015, and Paris won’t disappoint either. There are quite a few in the city, but I went to only two: the one on Champs Elysees and the one in Saint Germain des Pres (that one is extremely small though).

My friend Winnie and I paid a visit to this market in mid-November, not quite sure what to expect. It turned out to be quite a wacky winter wonderland…

Here’s what I recommend doing at the Champs Elysees Christmas market:

Grab a sachet of roasted chestnuts 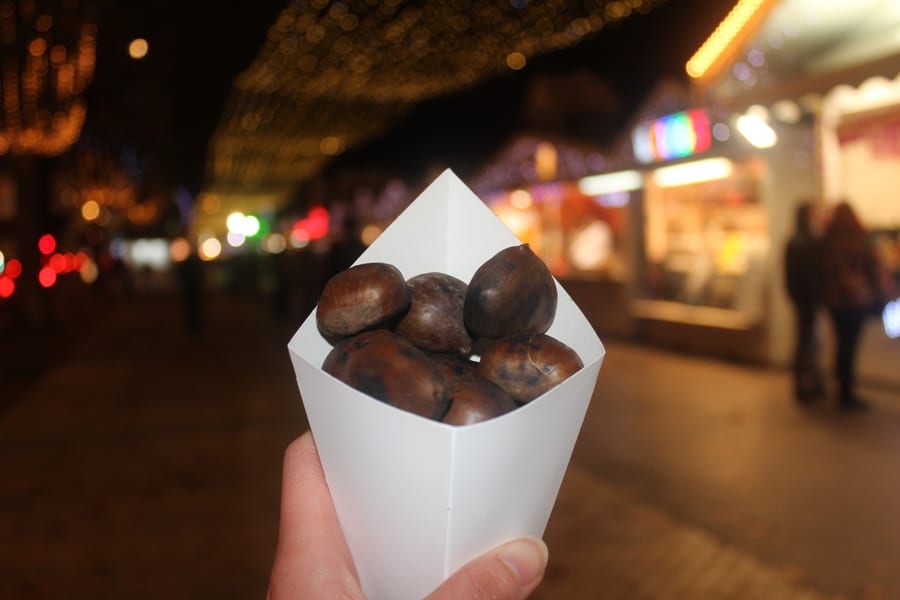 In the U.S., I never see chestnuts, but in France, they’re in everything. (Sidenote: I fell in love with the creme de marrons, chestnut spread, so much that I brought three cans home.) The only reason I knew roasted chestnuts were a Christmas thing was from that Nat King Cole song.

As you walk along the avenue, you’ll see vendors in tiny booths with large containers roasting chestnuts. You can get a small or large sachet, which they’ll put into a sort of paper cone. You can eat them as you walk–or so I thought. It turns out chestnuts are rather difficult to peel. So I stopped at one of the standing tables and attempted to open them with my hands and teeth. Roasted chestnuts do not taste as I expected them. They don’t taste like nuts at all, and are starchy like potatoes.

Sample the many treats 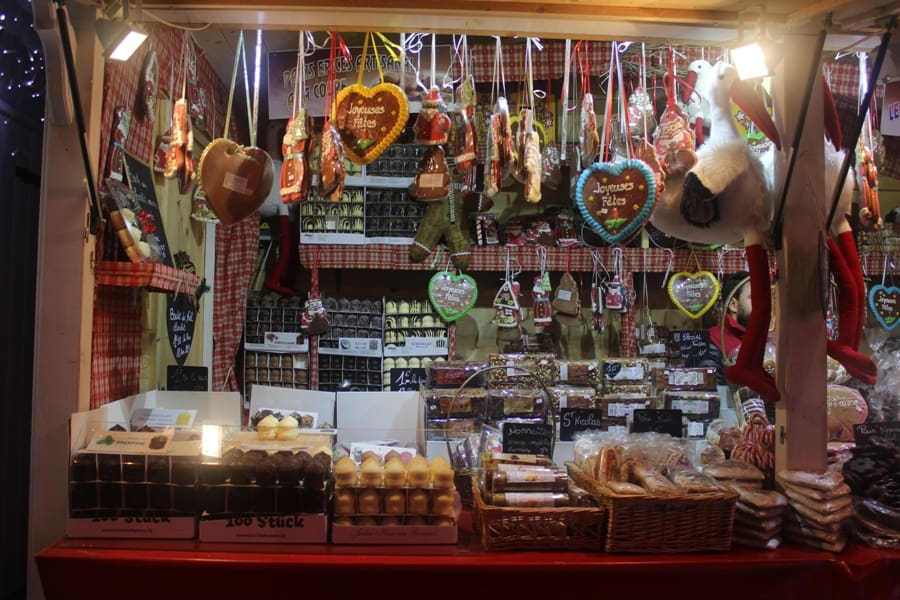 As you continue your stroll, many vendors will call out to you and ask if you’d like to sample what they’re selling. I got to try chocolate, cake, and foie gras. Foie gras is  made from duck liver, which I knew, but I’d never tasted it before. I did not expect it to taste the way it did, which is kind of irony/coppery. It made me gag, and I kept trying to disguise my disgust to the poor vendor who was trying to sell me on it. 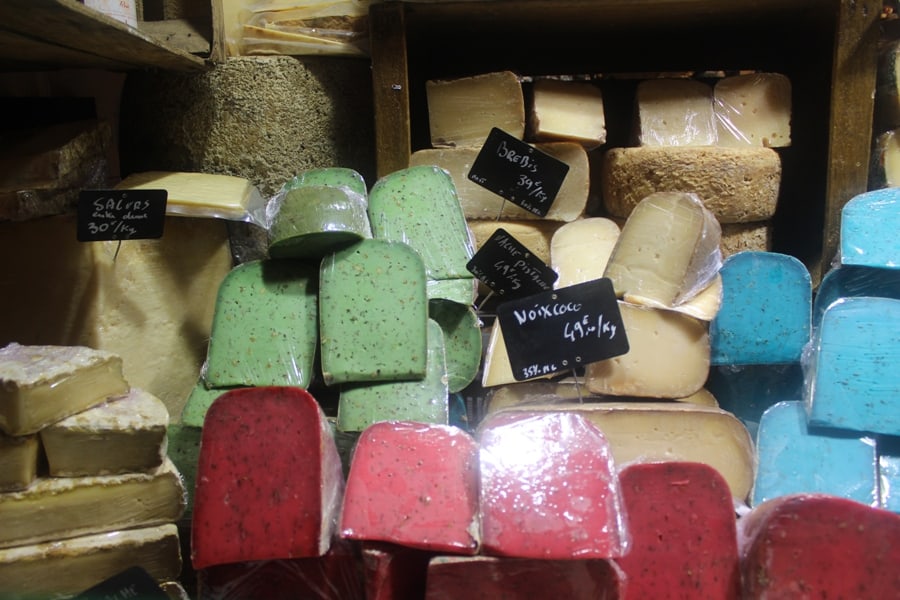 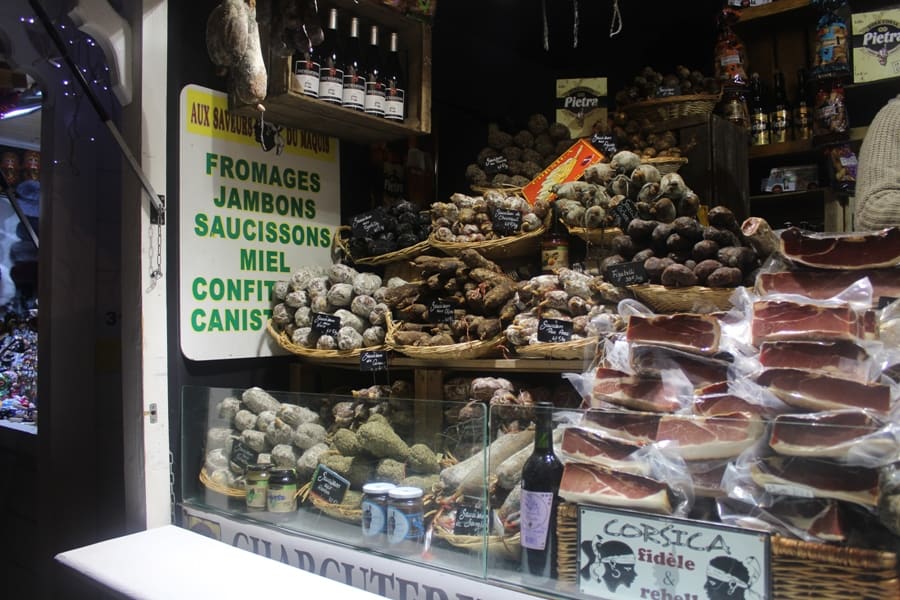 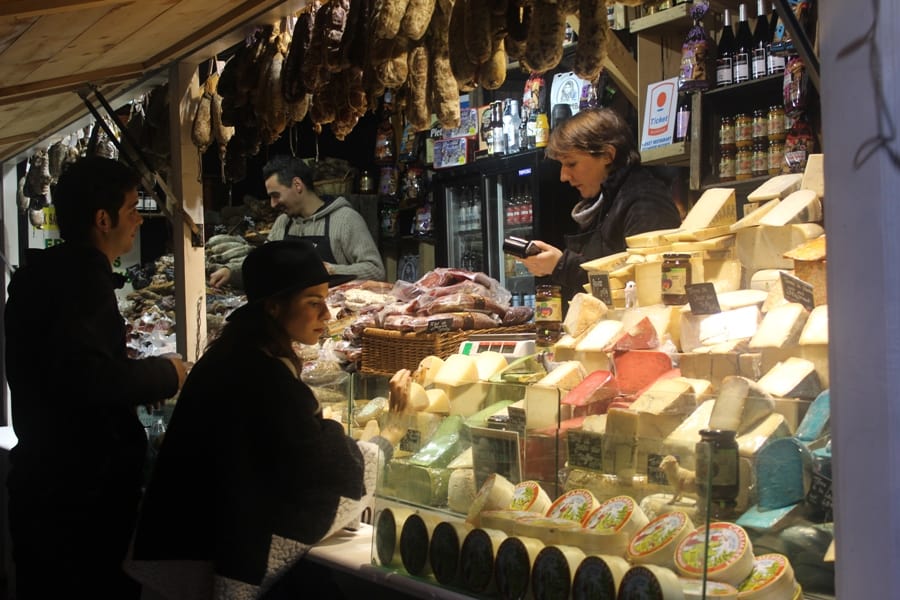 Foodies, this is where you want to be. You can even get escargot, which won’t be difficult to find at all because it’s in the booth with the giant picture of a live snail on it.

Get the smoked salmon with potatoes and salad 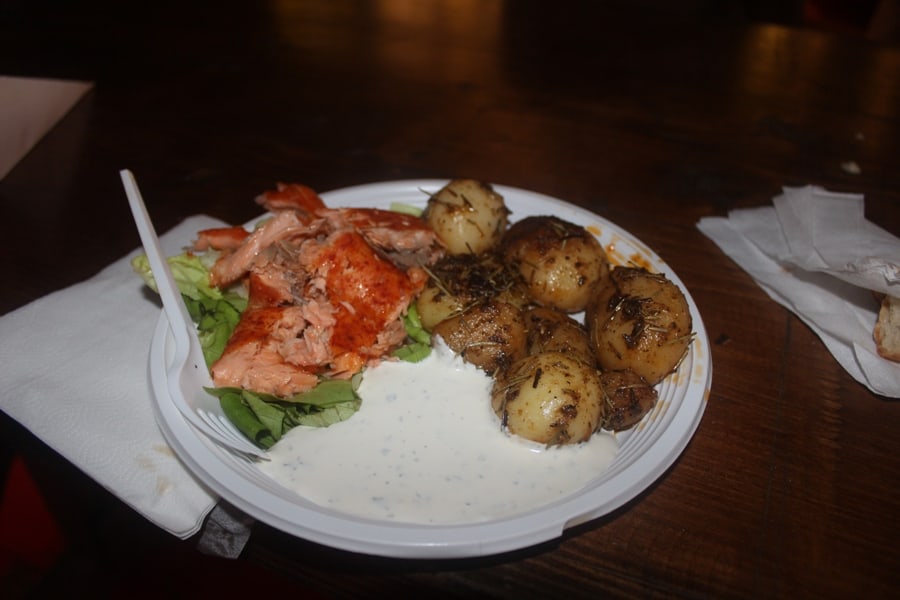 They smoke the salmon over wood in a fire pit. It’s kind of pricey at 14 euros, but it’s delicious. I actually went back a few days later and ordered it again! 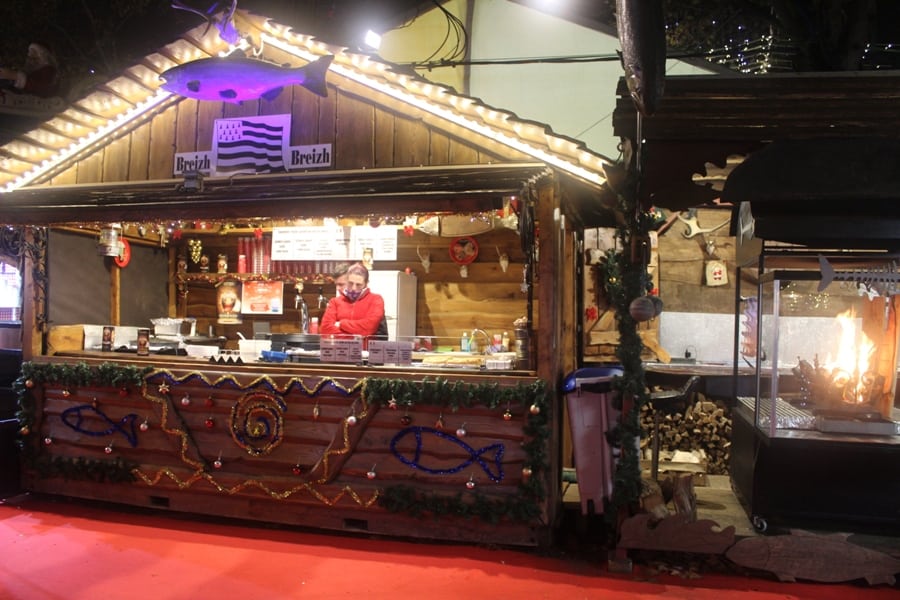 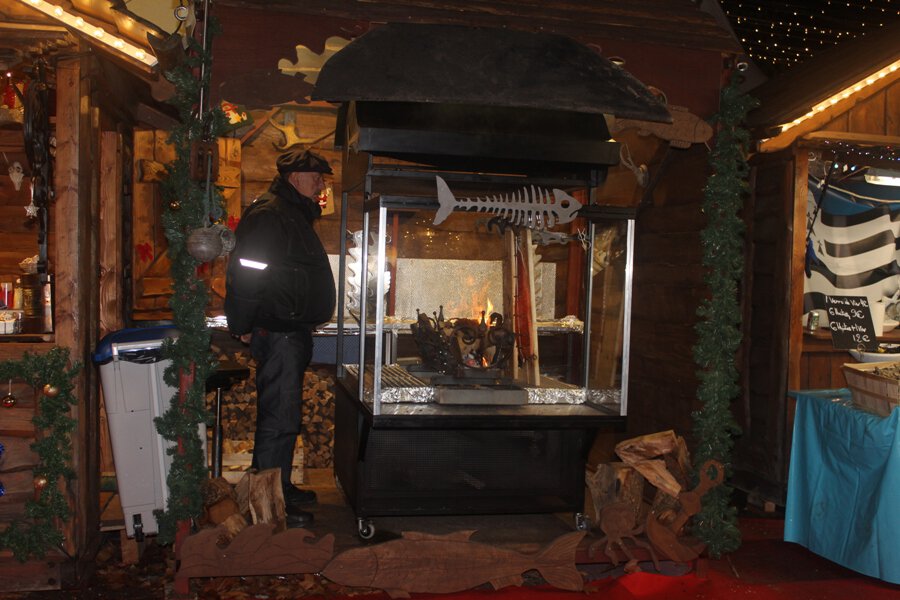 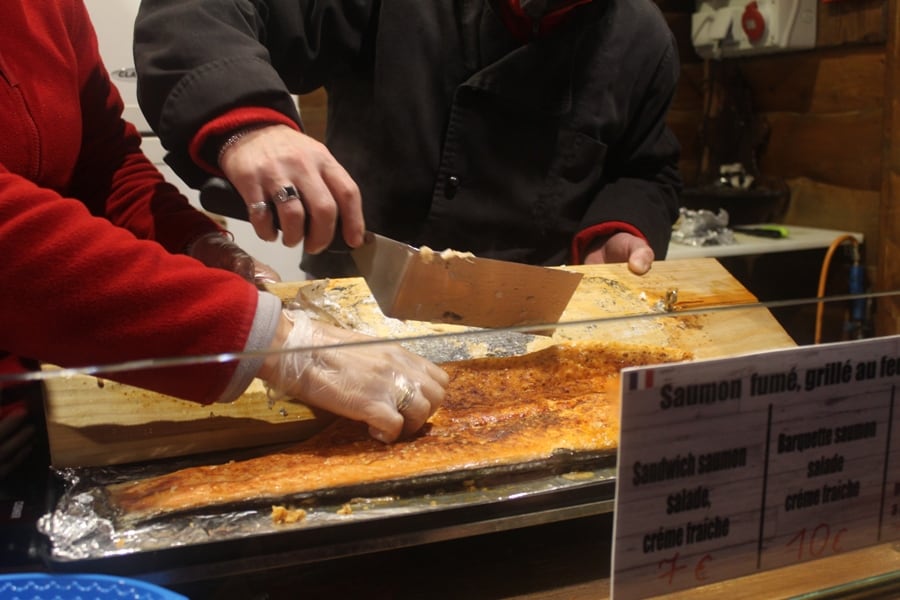 Get the mulled wine 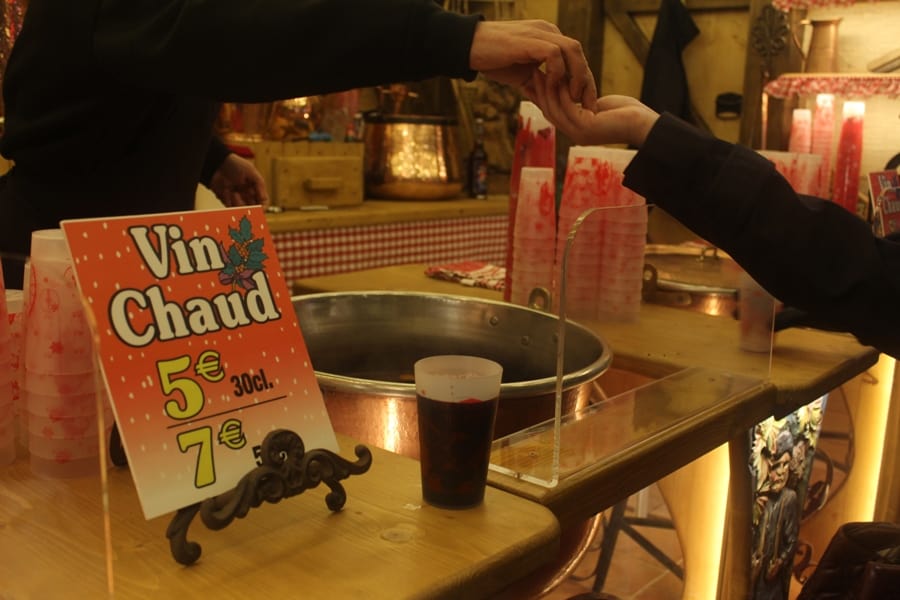 Vin chaud (“hot wine”) is also known as mulled wine and gluhwein. It is red wine with spices added in. I don’t like the taste of wine (or any alcohol for that matter; yes, I’m a weirdo), but it’s actually pretty good! And if you do love wine, then you’ll love this! You’ll see it for sale at vendors all over the Christmas market, but I recommend getting it from the Village Gourmand, where they scoop it out of large pots. At other places you’ll see it kept in a metal container without a heating element, so it doesn’t seem as “fresh.” 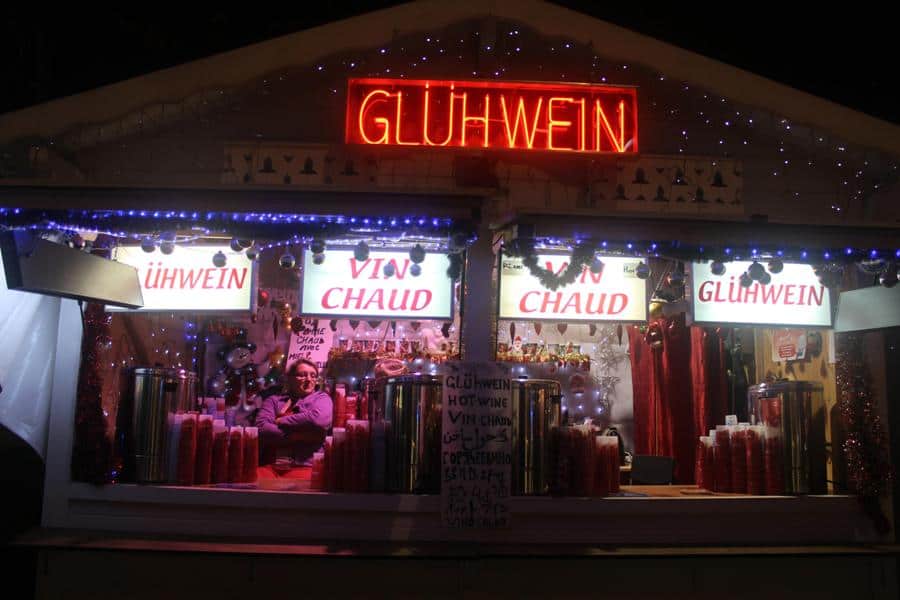 When Winnie and I wandered into the Village Foret Magique, things started getting weird. It was like a giant petting zoo, but with large stuffed electronic animals that were moving.

Visit the “animals” at the “zoo”

Apparently having large, fake animals that move is really popular at all Christmas markets (I only know this because Winnie went to the German Christmas markets after this and sent me video of all the fake moving animals).

I wish I’d gotten photo or video of this, but there was also an area with dinosaurs that were moving, along with overturned SUVs that the dinosaurs had apparently massacred. There was also a giant T-Rex leg that had its skin torn off, which I imagine could be quite disturbing for children…because it was for me.

And oh yeah, at some point we saw this too: 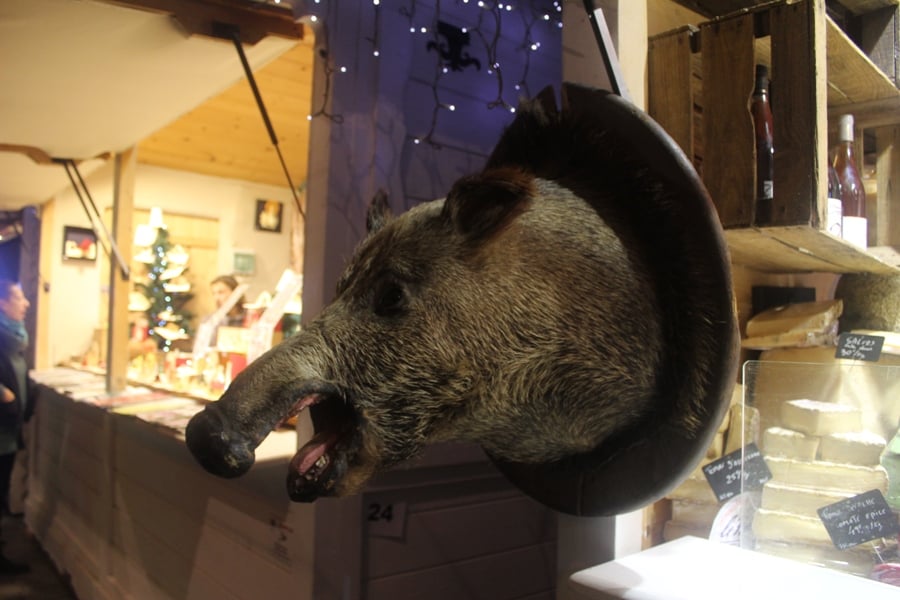 Bonus: Walk over to Laduree for macarons 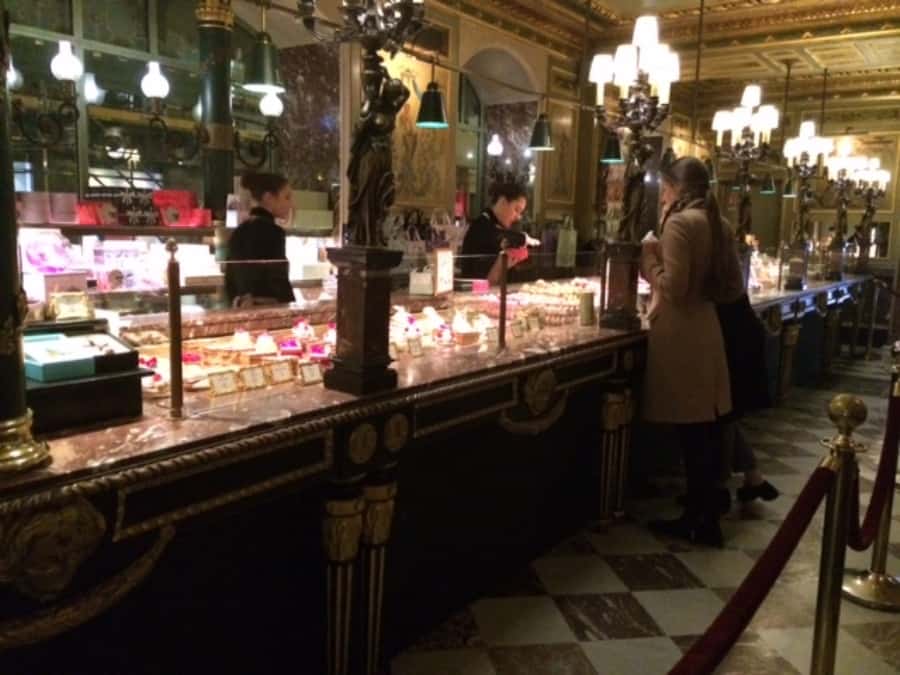 You’ll be within walking distance of Laduree on Champs Elysees, which according to many, has “the best macarons in Paris,” though I beg to differ (I prefer Pierre Herme). 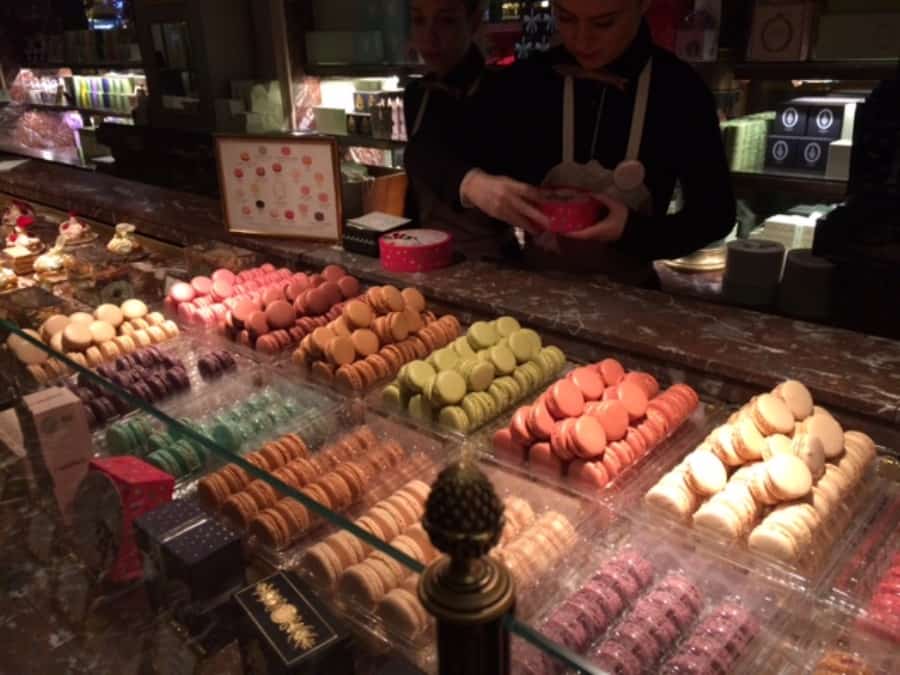 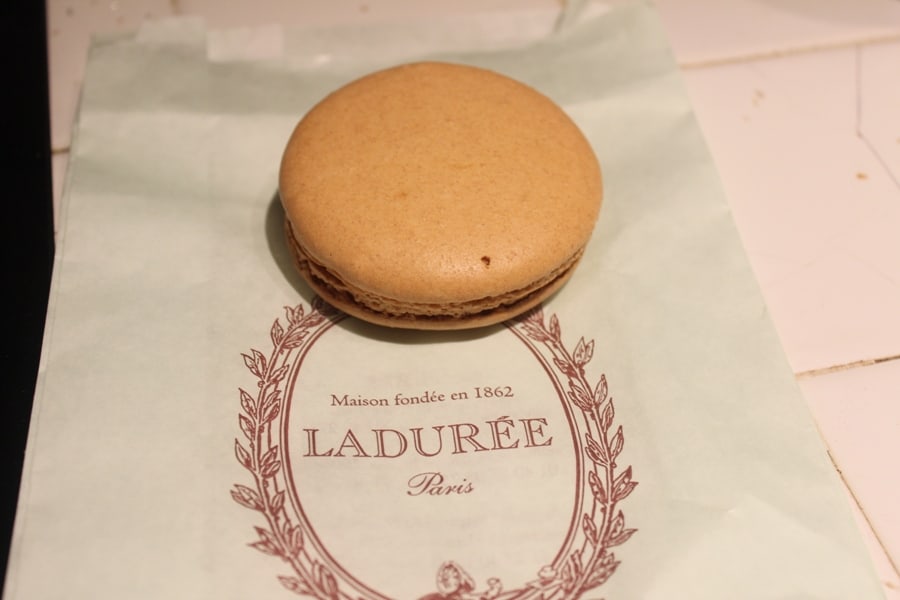 Tips to Know Before You Go

Address: It’s on the Avenue des Champs-Elysees. A good place to start is at the Place de la Concorde.

How to Get There: If you’re going by Metro, take line 1 (the yellow line) and get off at the Concorde stop. If you’re walking, an easy way to find it is to look for the giant lit-up Ferris wheel.

Cost: Free to roam, but obviously you’ll need money for food, games, drinks, etc. There are free samples though!

Bathrooms: There are bathroom trailers set up with toilets and sinks inside, but you’ll have to pay to use them. Outside the stalls, there’s an attendant whom you have to pay before you go in. I can’t remember the exact price, but it was less than 1 euro.