Roam Coliving Miami – Get a Glimpse Inside This Digital Nomad Paradise!

9 min read
*Affiliate disclosure: I may receive commissions if you buy via the links below. As an Amazon Associate, I earn from qualifying purchases.
47shares

I’ve been eyeing Roam coliving for a while now. When I first heard about the startup in 2015, I thought it was the perfect solution for a location-independent digital nomad like myself—flexible leases that give you the freedom to move from coliving space to coliving space across the world.

Now, for those of you not familiar with the term “coliving,” it’s essentially where you live and work in a community in shared spaces. Coliving often consists of guesthouses with coworking and other shared spaces for you to live and work with like-minded location-independent entrepreneurs and employees.

A Tour of Roam Miami 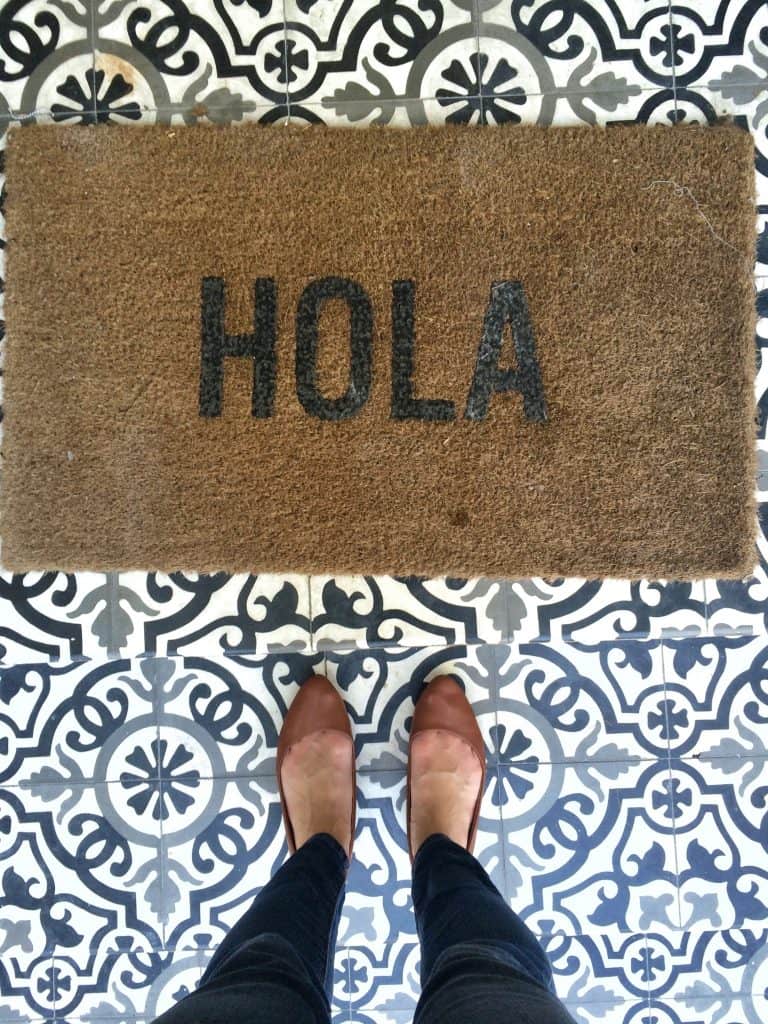 On a recent trip to Miami, I reached out to the folks at Roam to see if I could get a tour of their coliving space. I was actually considering moving to this Roam location last year, but had never even been to Miami, so I felt like now was a good time to check it out!

Straight off the plane from the Miami airport, I headed over to Roam in Little Havana. It took me nearly an hour to find my way out of the airport (I had tried, in vain, to locate the train station), and the second I stepped out I was greeted by blaring hip hop music, honking horns, and brightly-colored houses. Needless to say, I was feeling frazzled.

When I got to the gates of Roam, a man who happened to be outside the entrance (I assume he lives at Roam), entered the code into the tall black gates and let me inside. I found myself standing before a pastel yellow two-story building with the words Miami River Inn on the top of it. (I later learned from the property manager, Nick, that because the Roam buildings are historic, those words cannot be removed. Fun fact: Roam Miami is located in the oldest boarding house in the city!) 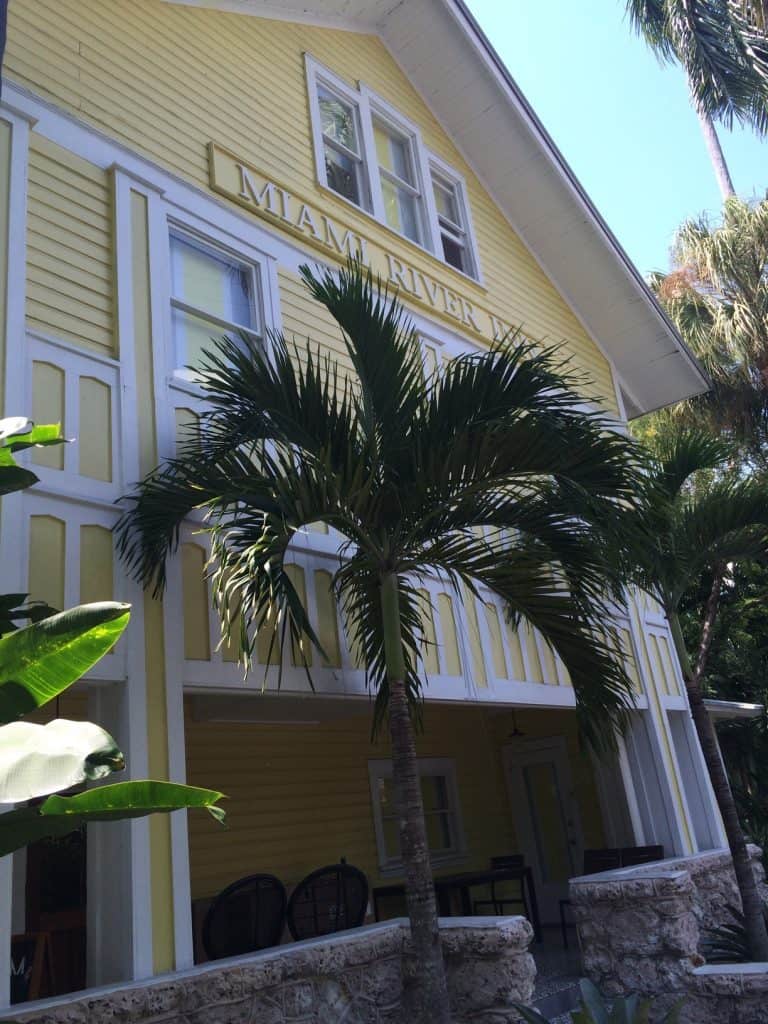 Stepping onto the property was a welcome respite from the hustle and bustle of Miami. I was shocked, to be honest. It was a late Friday afternoon, and I expected loud music and parties to kick off the weekend. 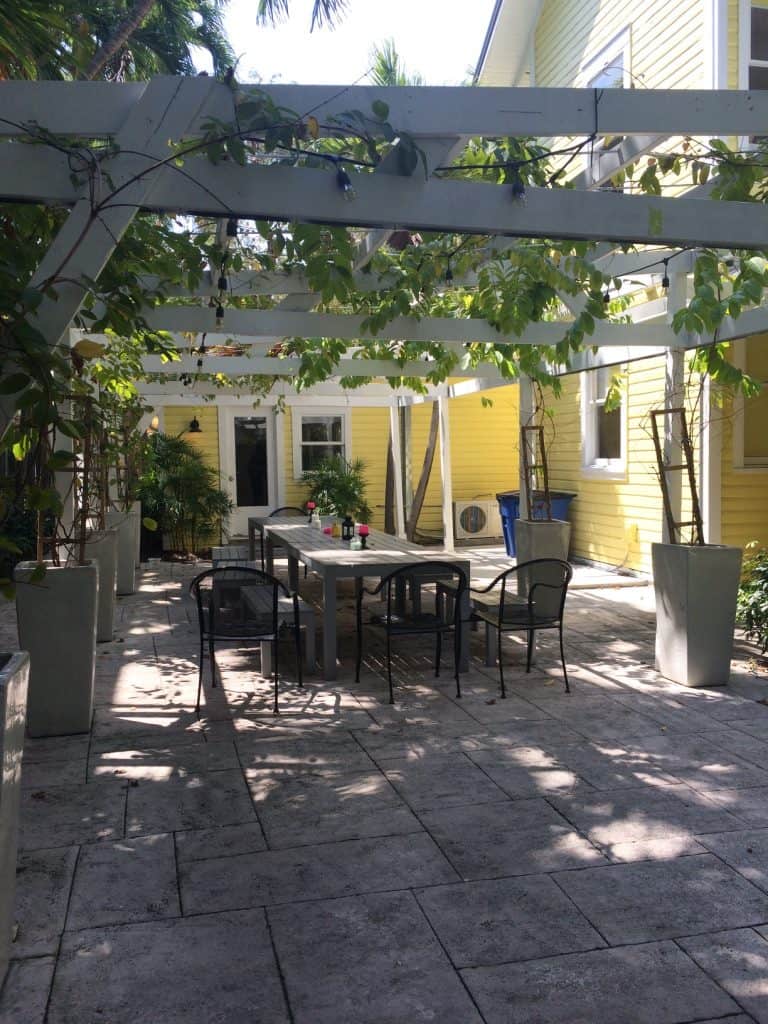 Instead, I barely saw anyone until I went inside the kitchen, where the property manager, Nick, and two Roamers were chatting.

To my left, little wire baskets with name tags on them and grocery items inside lined the shelves of an industrial-grade refrigerator with glass doors.

When I walked into the courtyard, the only sound I heard was the whispering of the wind through the palm tree fronds. In a hammock strung between two palm trees, a woman lounged reading a book. It was downright peaceful. It felt more like a five-star resort in the Caribbean than a place for people to build businesses in the middle of Miami. 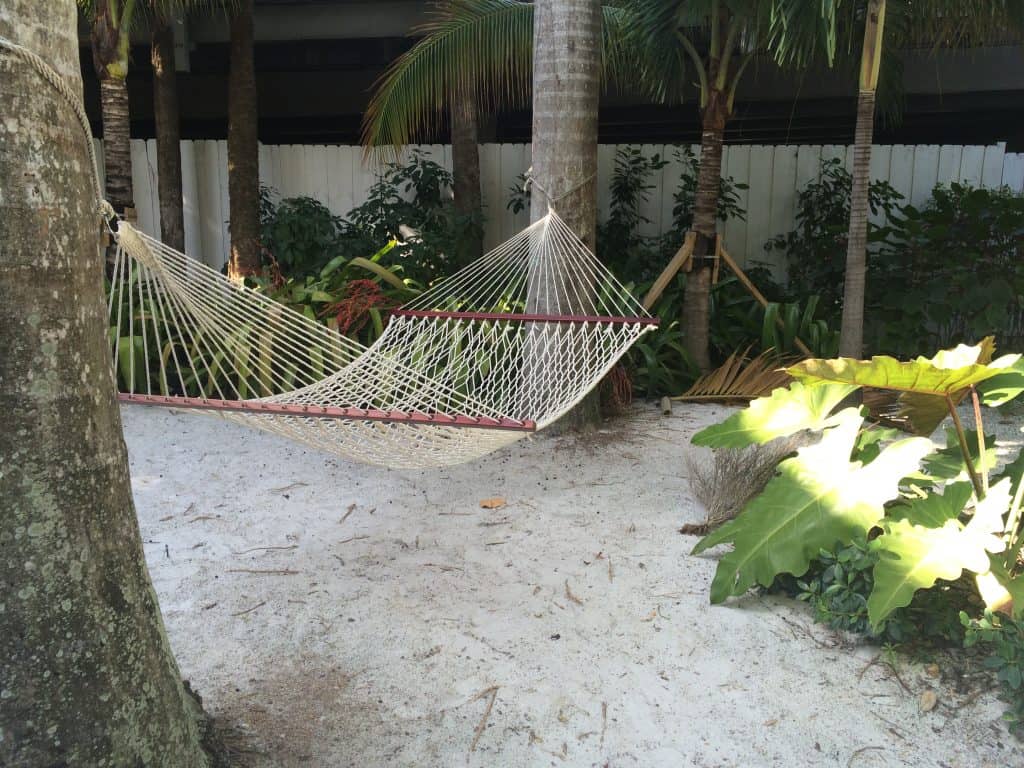 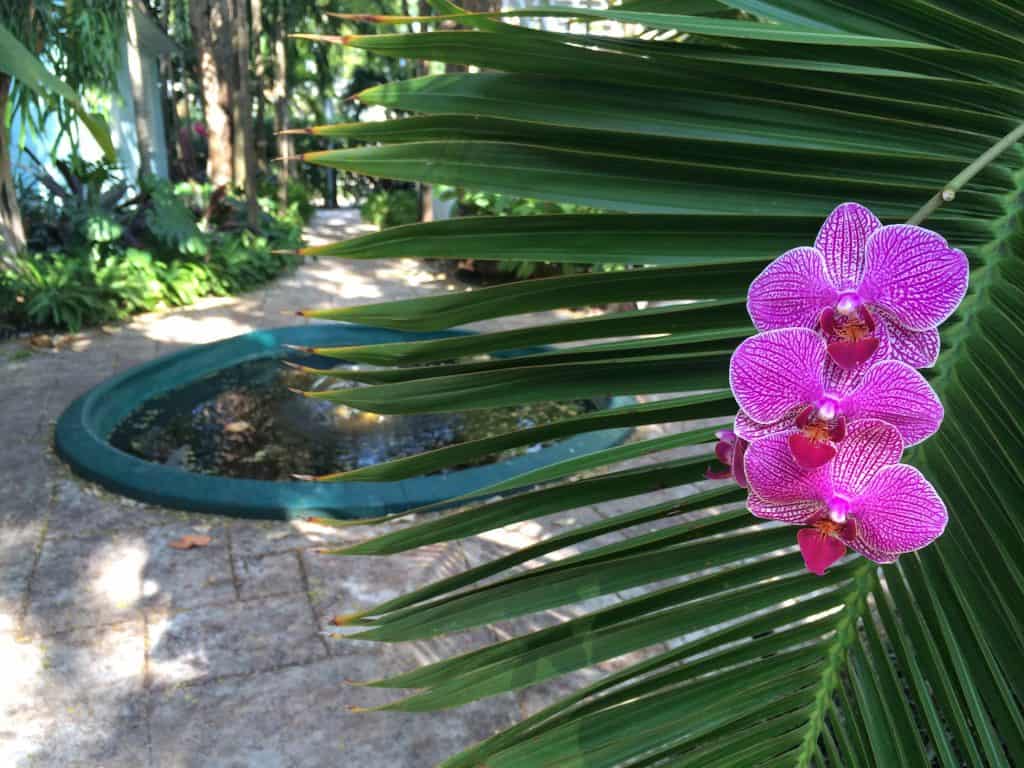 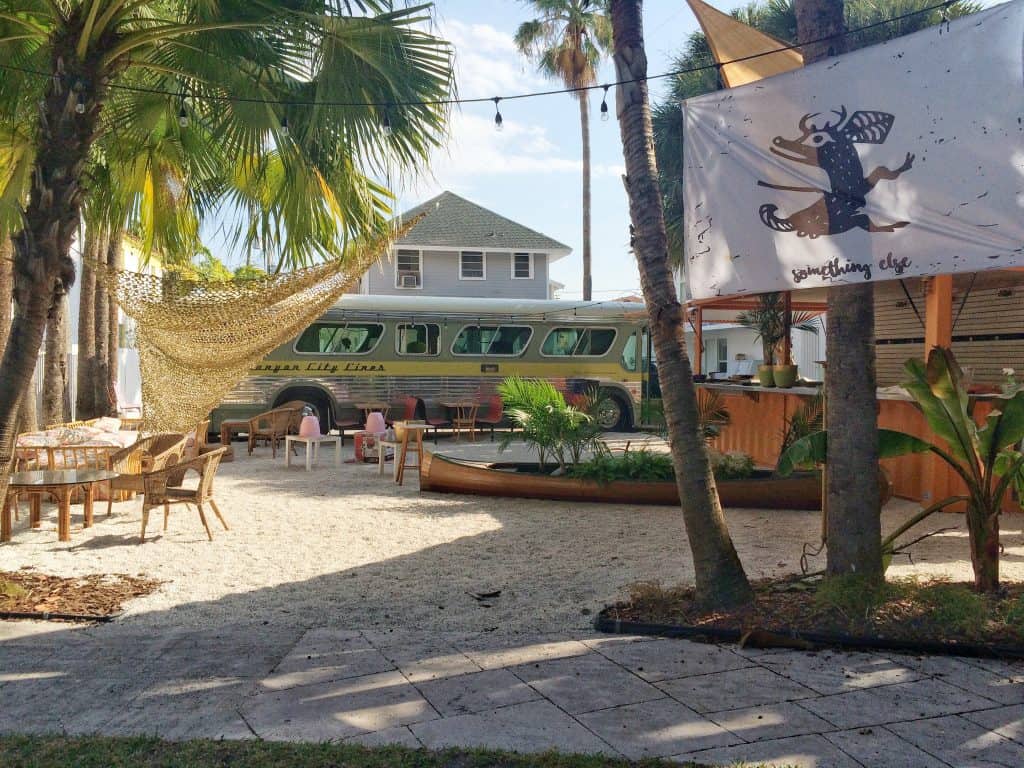 Upon reaching the pink house (each house on the property is a different bright color), I was in for another shock: The coworking space is actually a place for working. Before stepping through the doorway (which is guarded by a locked door for which you need a key fob), there’s a sign that makes you check your intentions before you enter the coworking space: 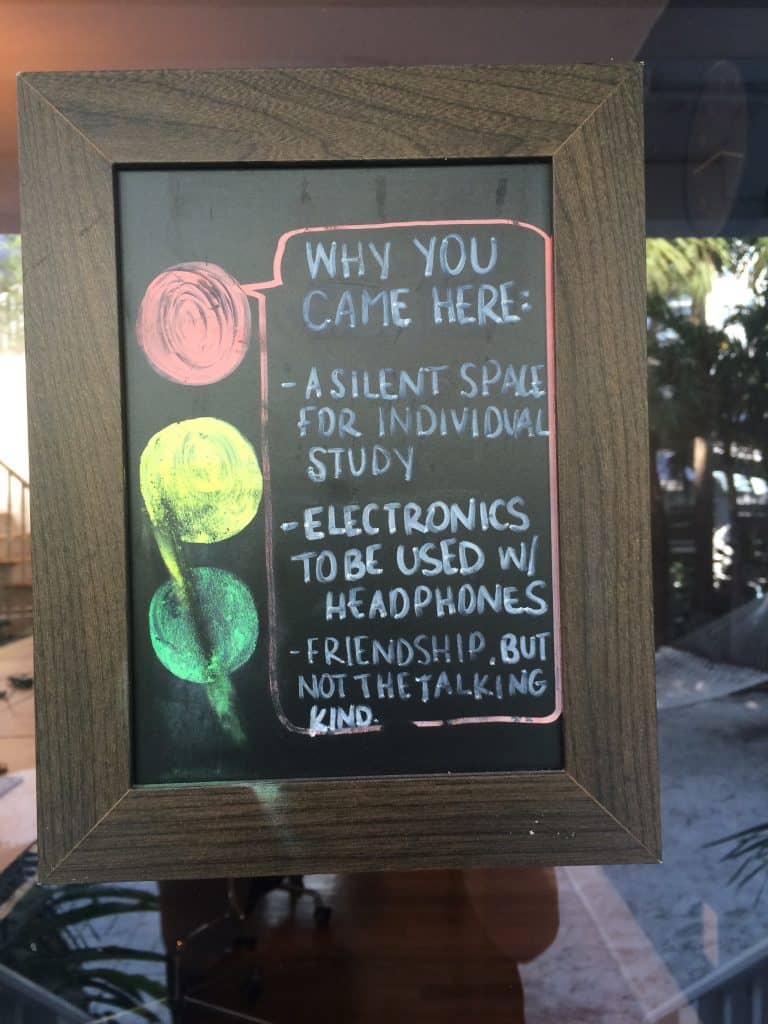 Nick introduced me briefly in hushed tones to the table of about four people, and when he walked out, I fully expected them to ask me questions and personally introduce themselves.

They were legit working on their laptops. I thought back to the times I “worked” out of a coworking space in Toronto; I really only went in to socialize. If I knew I needed to get work done, I stayed in my apartment. 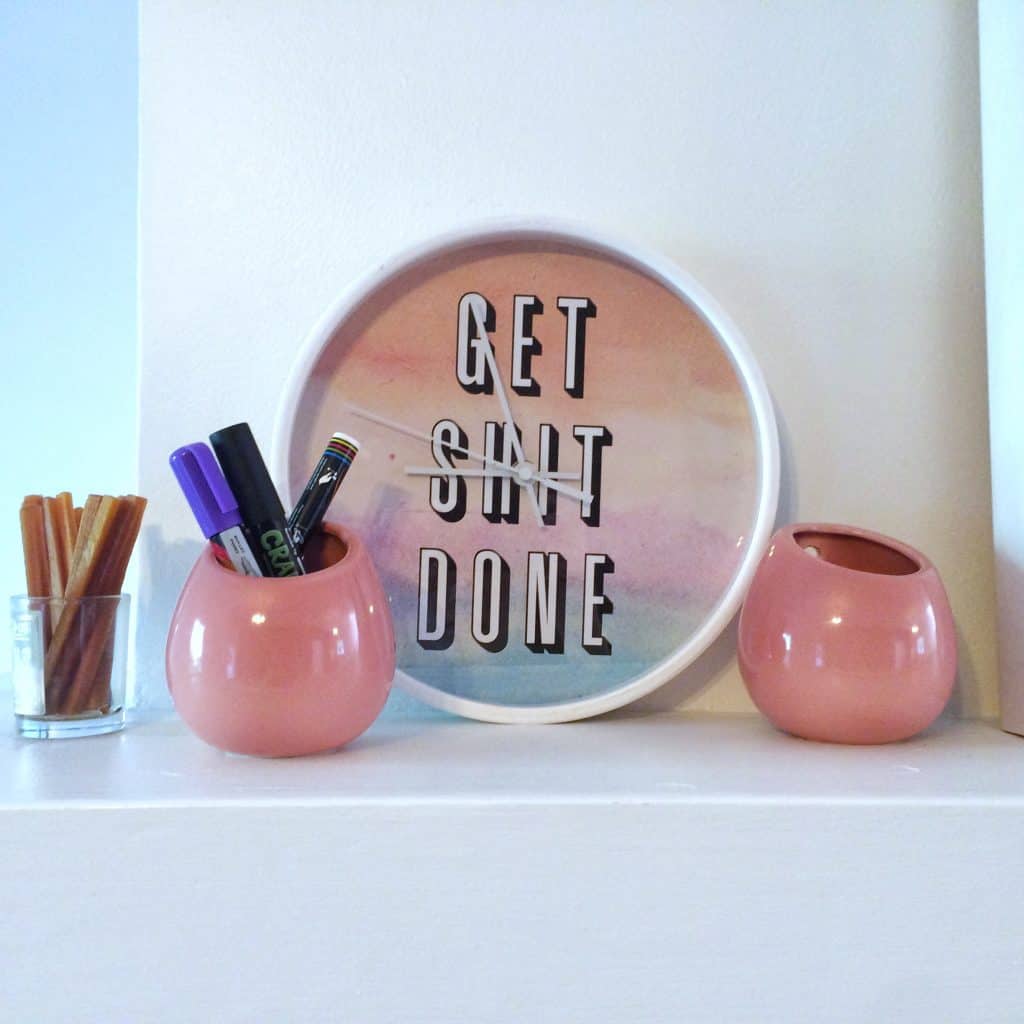 I brought up this stark contrast to the community manager, Isabel, later. She pointed out that people who come to Roam, especially since they’re paying for it, come to work. They’re focused on their work because they know they need to make the most out of their experience, and they reserve leisure for their off time.

That soothed my biggest worry about this space: It seems set up almost to be like one big party. But it was silent, even on a late Friday afternoon.

I was able to get some work done in Roam’s coworking space, as well as charge my dying iPhone. And, in case you’re wondering, yes, Roam’s Wi-Fi is blazing fast. This was the speed when I checked it (keep in mind I had my VPN on, which slows speeds down a bit): 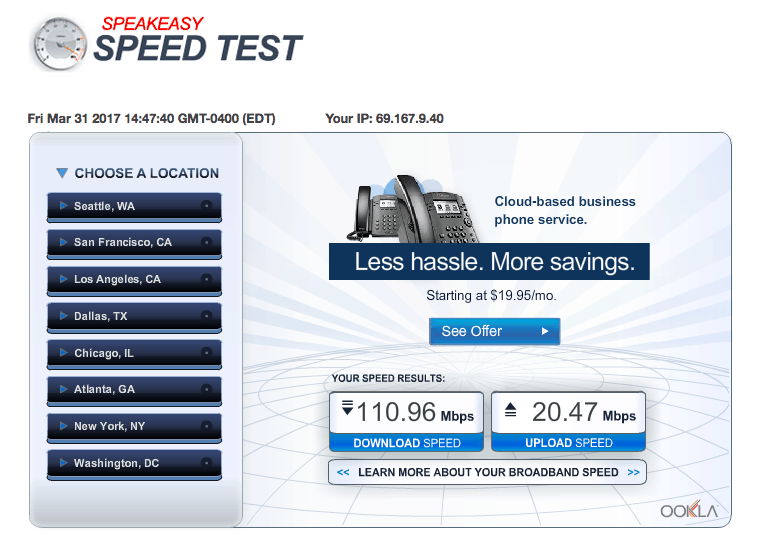 Isabel took me inside each of the colorful houses. Each house has a shared living room where exclusive member events are sometimes held.

I also got to see their little community library (I LOVE these!) where you can take a book and/or leave a book. There’s also a place to project movies on the wall. 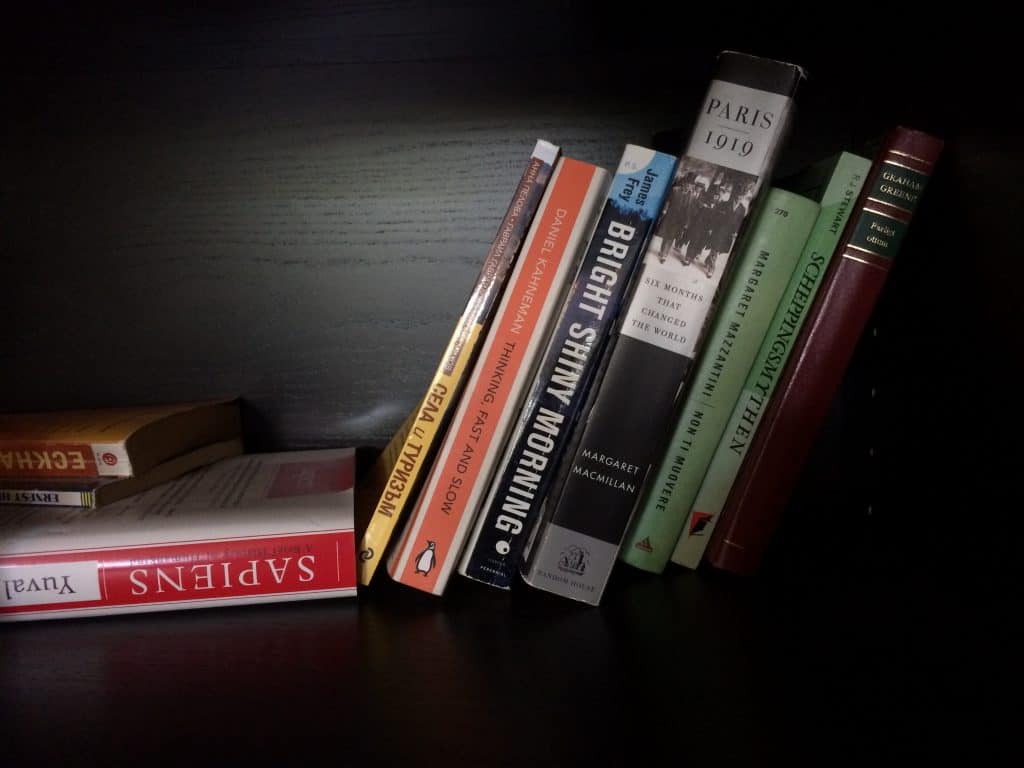 In addition, Roam Miami has 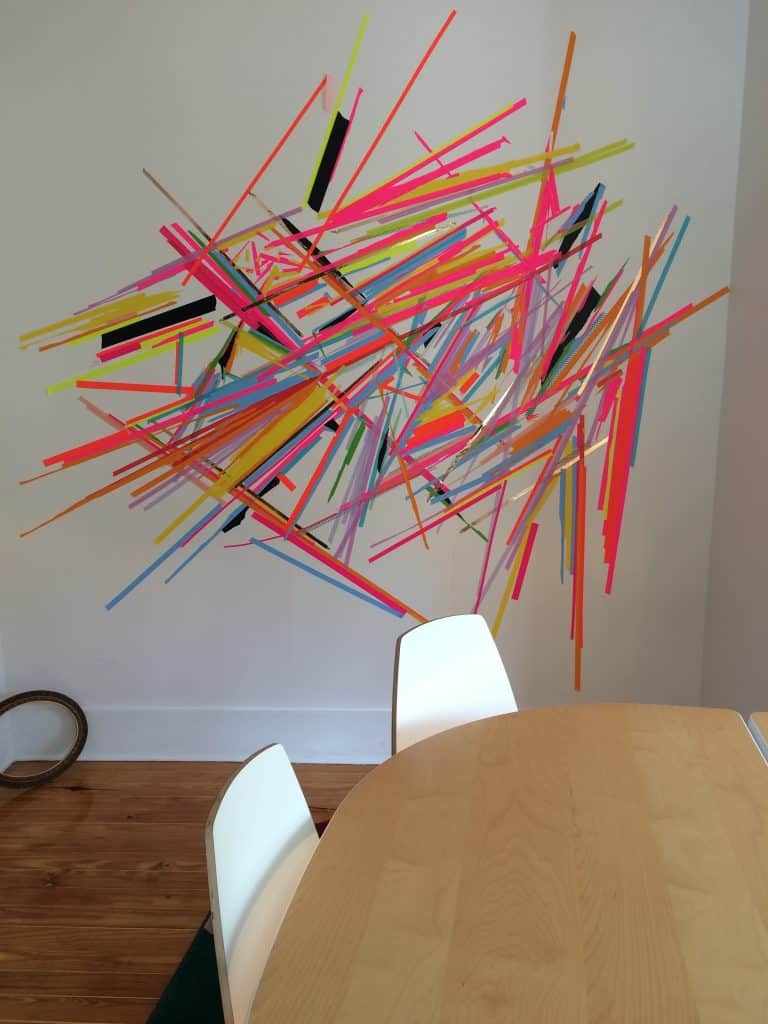 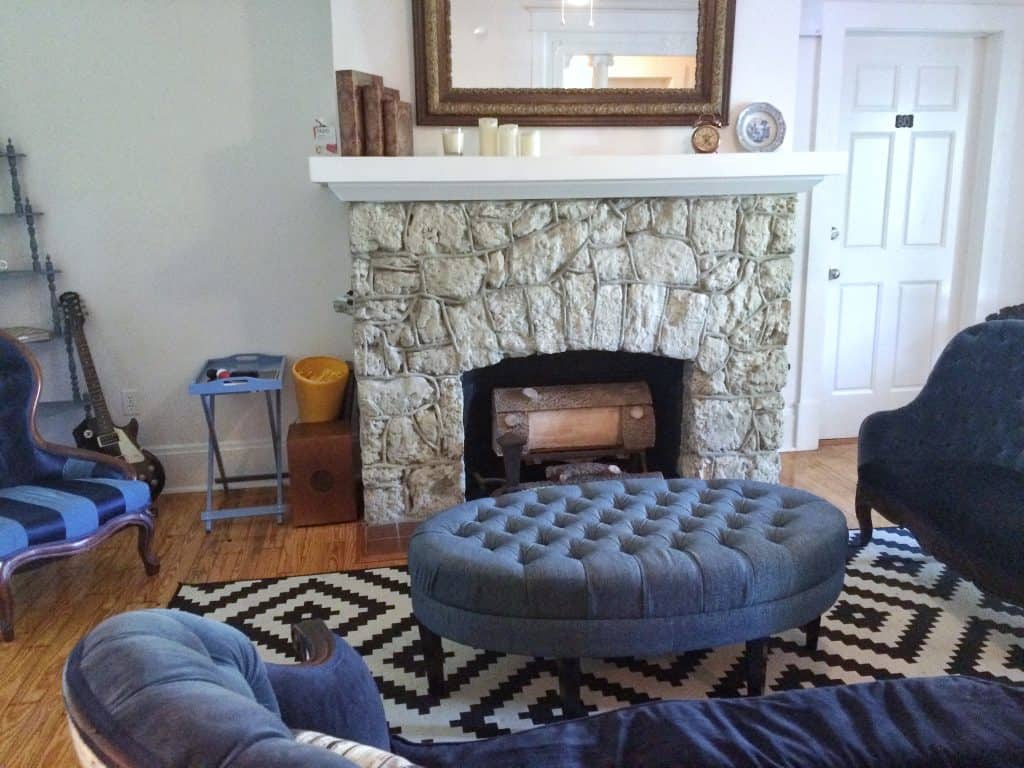 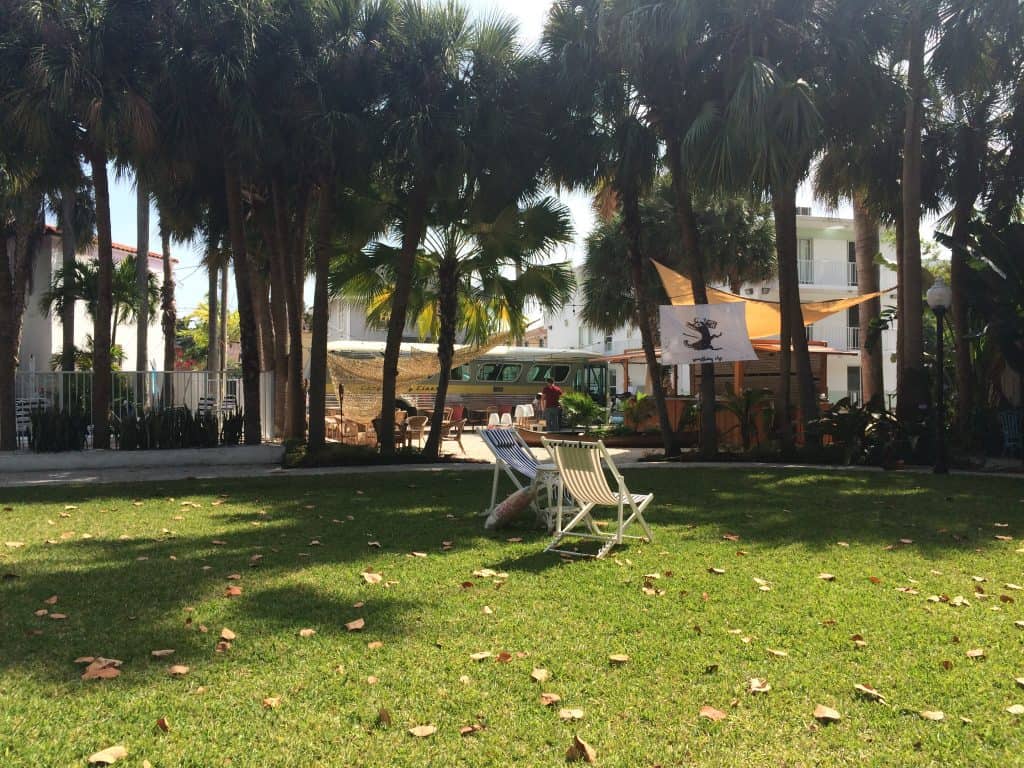 I didn’t get to see inside any of the guest rooms, probably because Roam Miami’s 38 rooms are fully booked right now, so it would have been weird if I asked to see someone’s room. Anyway, you can see photos of Roam Miami’s rooms on their website. What’s nice is each room comes with A/C (a must in Florida!), a sitting area, and a private bathroom.

Roam is expanding quickly and currently has locations in

What’s in a Name? Digital Nomad vs. Location Independent

“Digital nomads hate the word ‘digital nomad’,” Isabel told me. We were sitting in the sunshine beneath the vine-laden white terrace at the front of the property. Judith, a writer working on a piece about digital nomads for The Globe and Mail, had just joined us and propped her MacBook on the table. 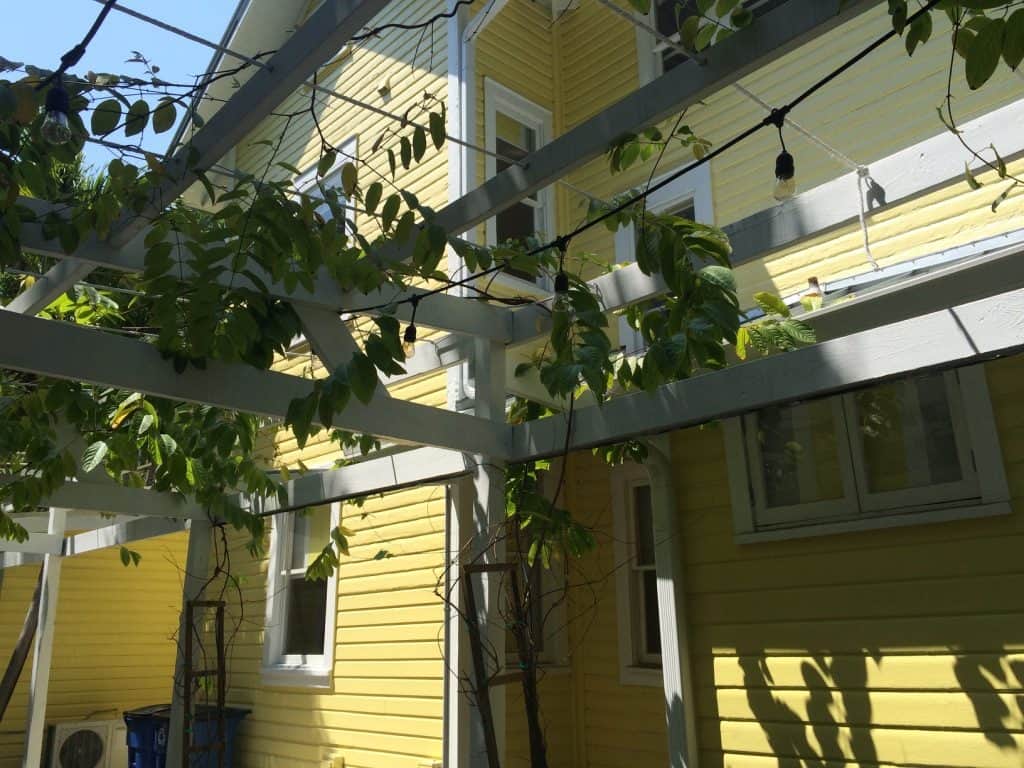 “You’re all so coddled these days,” Judith told me, regarding digital nomads/location independents. She reminisced about her time in Istanbul, where without the conveniences of services like Roam or Airbnb, the only way for her to find a place to sleep was to stop by The Pudding Shop and read the papers pinned to the community bulletin board.

“There was a lot of sleeping in caves those days,” Judith said. “Particularly in Greece.”

In recent years, when her daughter went to Istanbul, she informed Judith that The Pudding Shop has now turned into just another tourist trap.

During our conversation, we were joined by Liza, a pink-haired remote employee who’s prepping for her first bodybuilding competition.

Both Liza and Judith fascinated me (in fact, I kept saying, “You’re so fascinating!” over and over to the point it was probably just annoying).

If these two are any indication of the rest of the Roam community, I can definitely say it’s a great group of people!

Is Coliving Worth the Price Tag?

One of the biggest critiques of coliving is that it costs way more than doing things on your own as a digital nomad. For Roam, prices start at $600/week or $1,800/month (and prices are higher for certain cities, such as London, which have higher costs of living).

To put that $1,800 monthly price tag in perspective, the highest I ever paid on rent for a private apartment in San Francisco was $1,575 in 2016, and that included utilities and Internet. So, if you look at that alone, you might say $1,800 just isn’t worth paying to live somewhere—but you’d be missing important pieces of the puzzle.

When I brought this up to Isabel, she pointed out that, yes, you could do it more cheaply without a coliving membership, but what you wouldn’t get is:

Let’s look at that last point, as I don’t think you can fully appreciate the luxury of having things taken care of for you, unless you’ve been going it alone as a digital nomad. While, yes, I paid “only” $1,575 a month for an apartment in SF with utilities and Internet included, the stress and uncertainty that went into finding that apartment and getting everything set up really ate away at me. There were a solid two weeks where I hardly got any work done because I was having issues with the Internet and the apartment was still being renovated.

Every time I land in a new city, I go into a panic trying to find a suitable place to live. This can take days and weeks off my productivity.

Plus, I never had a coworking space membership included with my rent. To give you an idea of what the additional cost would have been, a Hot Desk coworking membership at WeWork in San Francisco starts at $220/month.

So, yes, you can definitely live way more cheaply as a digital nomad without a coliving membership. But that doesn’t always mean it’s the best option for you. It depends on what you’re after.

Would I Live in Roam Coliving?

To be honest, I’m not sure. This has nothing to do with the tour I was given, but with a recent change in my priorities. For the past four years, I’ve lived and worked in the same space: whatever apartment or Airbnb I happened to be in. As my work and play became increasingly commingled, I got to the point where I needed my business life to be separate from my personal life. Having said that, what’s great about Roam is there is a dedicated coworking space where you can do work outside of your room, so there is a bit of separation.

Another thing I like about Roam is the quality of community. Let’s face it — Roam isn’t cheap. With the price tag being high, it tends to attract people who are serious about making the most of the coliving experience. You’ll see me write about this time and time again: One of the biggest challenges I’ve faced as a digital nomad is a lack of community, particularly a lack of friends who are living the same lifestyle I am. Roam would definitely solve that problem for me, and it’s why I’d still consider joining.

Would you consider living at a Roam coliving space? Why or why not? 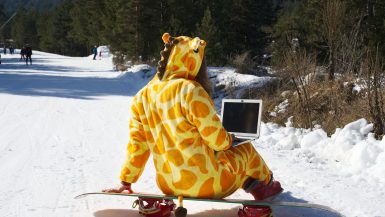 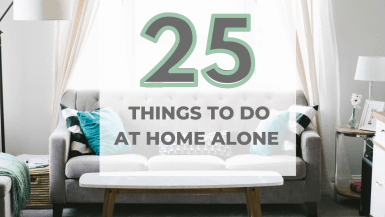 The TOP 25 Things to Do When Home Alone 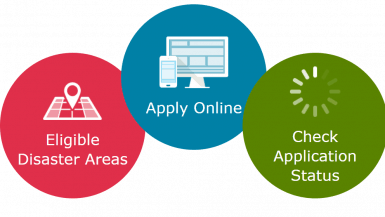 Where Can I Get a SBA Disaster Relief Loan