The Largest Tree in the World, Sequoia National Park

7 min read
*Affiliate disclosure: I may receive commissions if you buy via the links below. As an Amazon Associate, I earn from qualifying purchases.
385 shares

“In the vast Sierra wilderness far to the southward of the famous Yosemite Valley, there is a yet grander valley of the same kind.”
-John Muir, American naturalist and author

Highway 180, which you take into Sequoia National Park if you’re coming from the west, starts out as a nondescript road at 200 feet of elevation near Fresno and drastically changes once you near the park, turning into a winding road at 6,000 feet of elevation, hugging cliffs overlooking a well-forested valley below.

Although I’m told it is far, far better than its counterpart to the south, highway 198, it still makes my stomach turn, which is why my friend is driving instead. With each bend–left and right, left and right–I groan and complain.

When we pull up to the gates to the park, I am stunned into silence. The tree in front of me is bigger than the charter bus next to it. 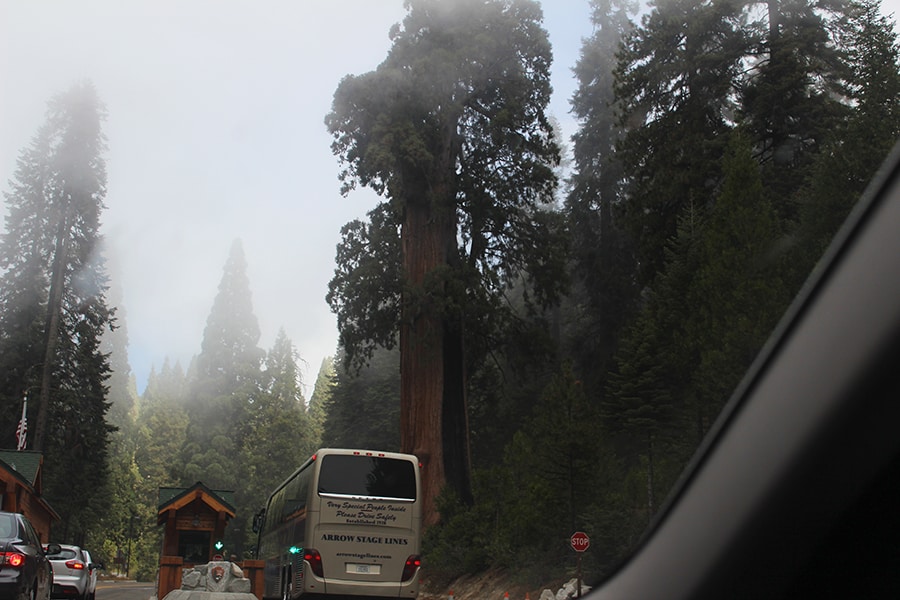 The most massive trees in the world are the Giant Sequoias, which grow naturally only on the west slope of the Sierra Nevada, about four and a half hours from where I live in California. So of course, I had to make the trip to see them.

Though less frequented than its northern neighbor Yosemite, Sequoia National Park is definitely a must-see.

Not only is it home to five of the 10 largest trees in the world, but it also boasts the highest point in the contiguous United States, Mt. Whitney,  and the deepest–or at least one of the deepest–canyons in the U.S., Kings Canyon (yep, it’s even deeper than the Grand Canyon).

Sequoia borders Kings Canyon National Park, and they are managed as one unit. Together, the two parks take up 865,964 acres–a whopping 96.8% of which is designated as Wilderness.

I know that our bodies were made to thrive only in pure air, and the scenes in which pure air is found. -John Muir

After passing the gate into Kings Canyon National Park, I roll my window down and stick my head out.The air is crisp and cold, infused with the scent of pine needles and cedar. I inhale deeply; it feels like the first breath of fresh air in years.

Heavy fog engulfs the forest, swallowing the tops of trees and spreading a milky white glow all about me, making the whole scene that much more ethereal. 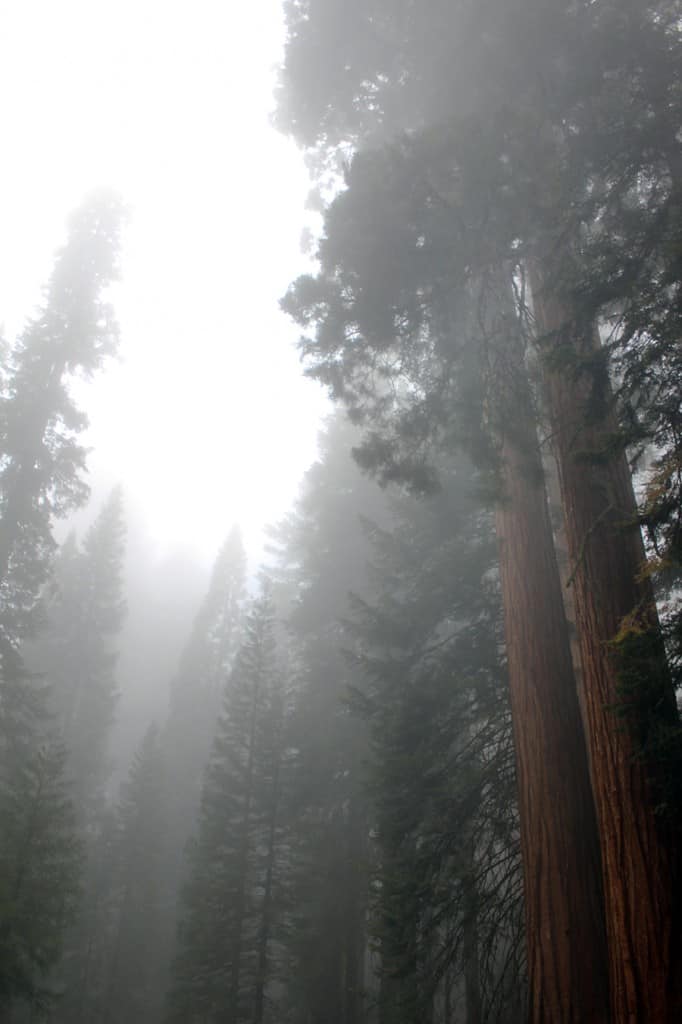 Our first stop is the General Grant, the third largest tree in the world by trunk and branch volume. When I get out the car, this is my first close encounter with giant sequoias. 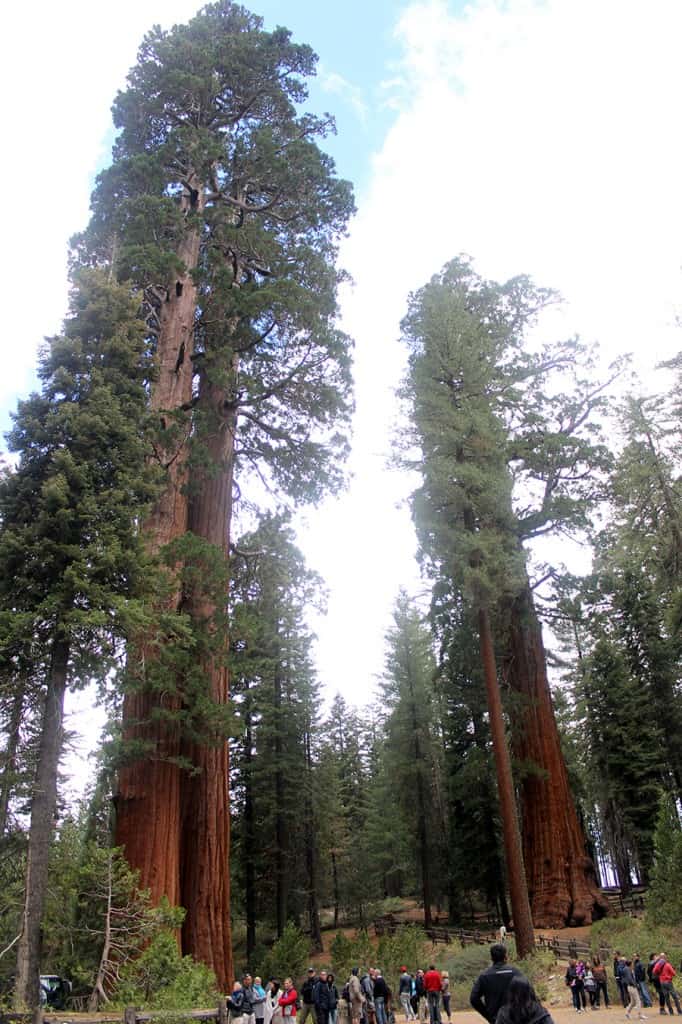 To get to the General Grant, we have to walk a short trail past some pretty breathtaking sequoias. Halfway there, I realize I forgot to change my shoes. I am the only one “hiking” this trail in ballet flats.

The sequoias are both beautiful and terrifying. It’s hard to really know what it feels like to be in the presence of these giants until you are standing before them, craning your neck just to try to see their top branches, knowing that just one branch falling from these trees could crush you.

According to a plaque on one of the trails, in the 1800s people were in such disbelief that these giants could exist that men actually cut down sequoias just to ship them back home as proof. Even so, the public was still skeptical, calling it the “California Hoax.”

Meeting General Sherman, The Largest Tree in the World

As we drive to the General Sherman parking lot, the fog becomes so thick we can hardly see the road in front of us. 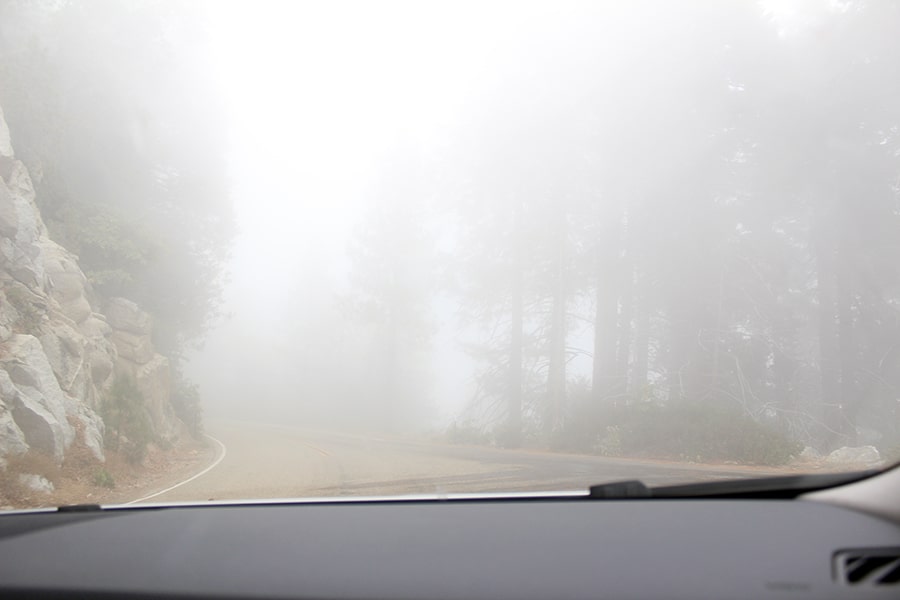 This is the view of General Sherman as we approach it on the trail.

Thankfully, once we’re up close, its gargantuan, reddish trunk is visible, though its top branches are a blur.

As I step back to take in this giant, it occurs to me I have never met a living organism as old or as large as this. The General Sherman is estimated to be 2,200 years old, stands 275 feet tall, and weighs more than 2.5 million pounds.

We wait in line with the rest of the 20 or so tourists. Well, it’s not really a line, as there’s no real order; it’s basically whoever runs up to the tree the fastest after the last person is done posing for his or her photo.

Nature’s peace will flow into you as sunshine flows into trees. -John Muir 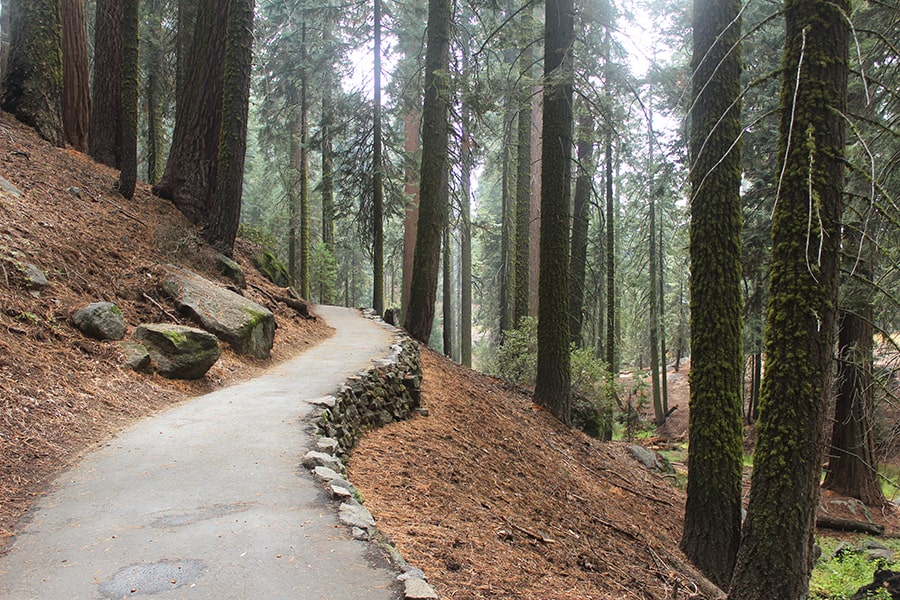 The Congress Trail, a 2-mile loop through some of the most prized groves of the park, begins just a few steps away from the General Sherman tree, but it feels like a world away. Most of the tourists have returned to their cars after taking photos with General Sherman, so I relish in the quiet solitude of the trail.

At this point, late in the afternoon, the fog has burned off and the sunlight comes pouring through branches, casting a golden hue on the trees, warming them up to a brilliant reddish brown that reminds me of cinnamon on toasted bread. 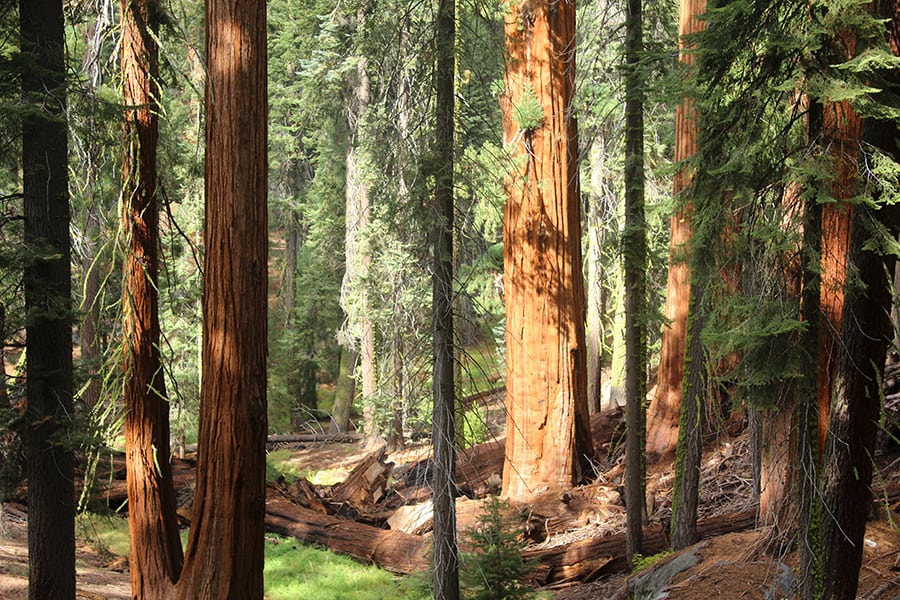 Deep in the depths of this forest of giants, I have never felt so cut off from the rest of the world, in a good way. Here the air is cleaner, the greens are greener, and the silence brings a welcomed repose. In this moment, I want nothing more than to sit cross-legged on the cool, moist forest floor and stare into that golden and seemingly endless forest forever. 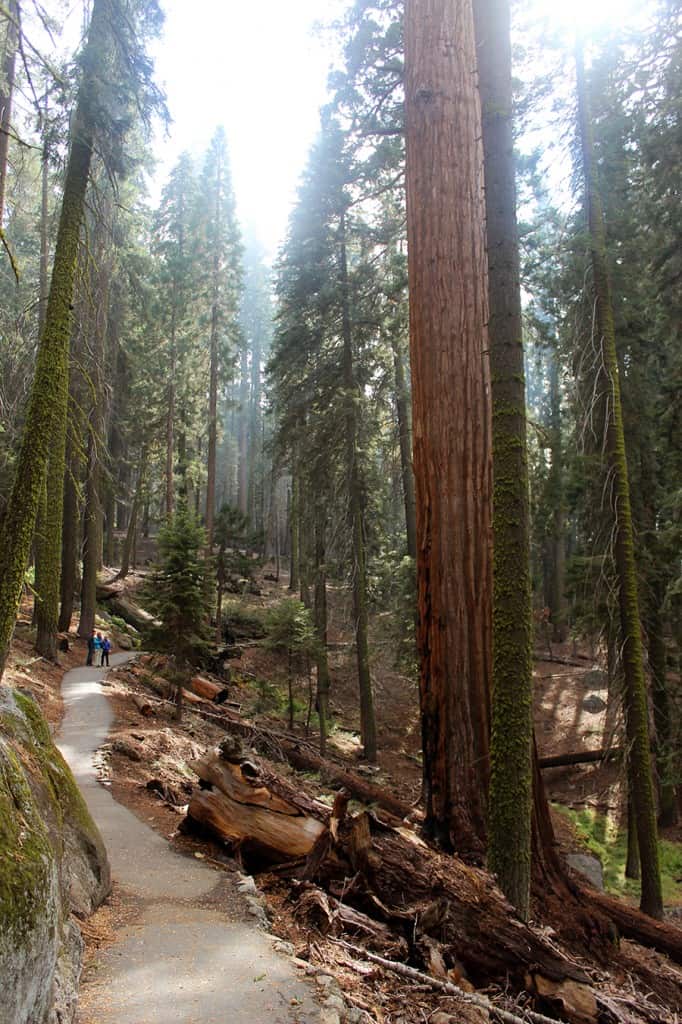 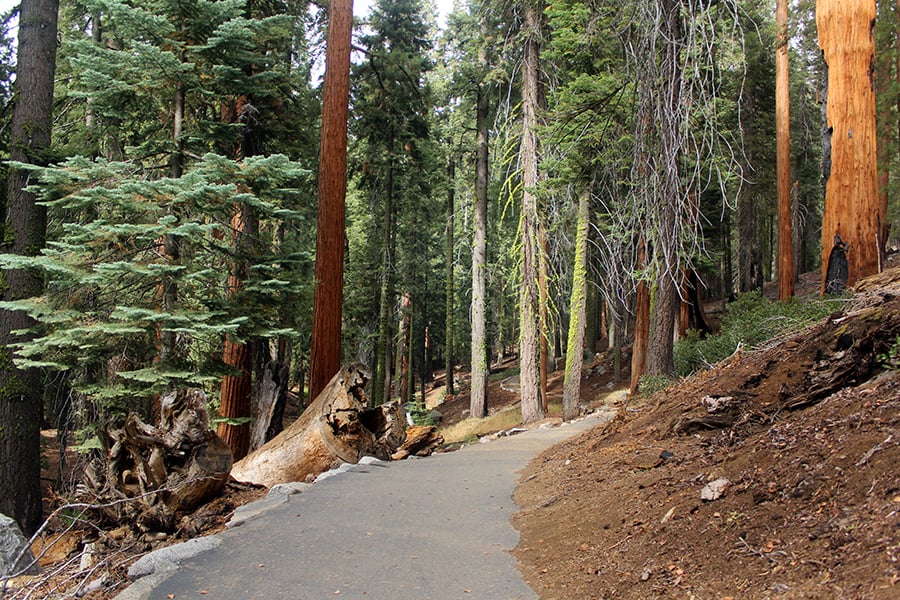 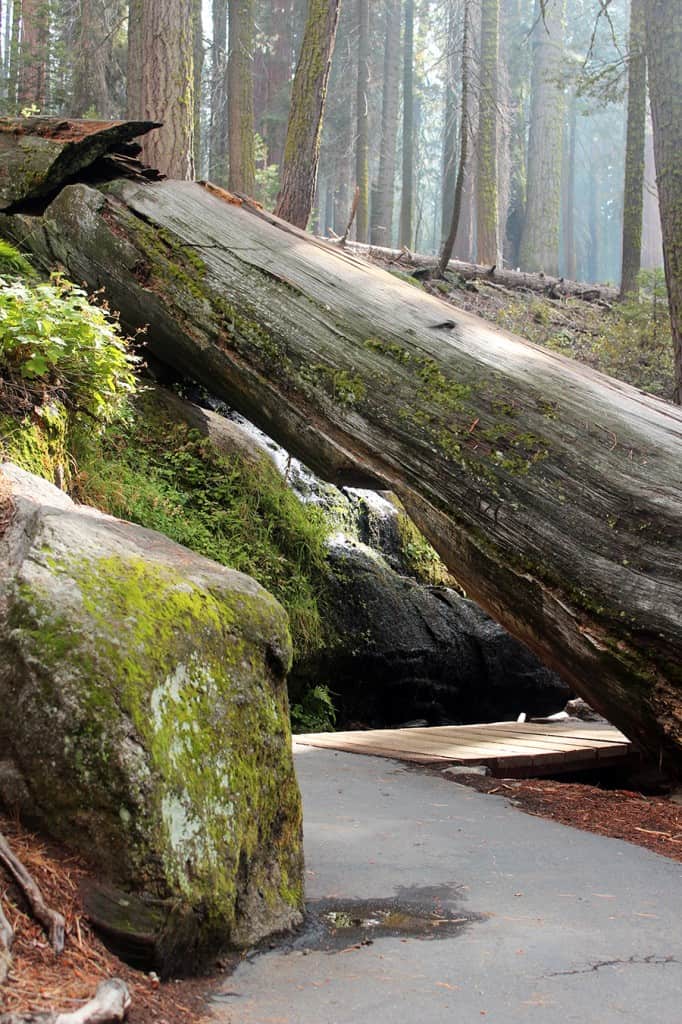 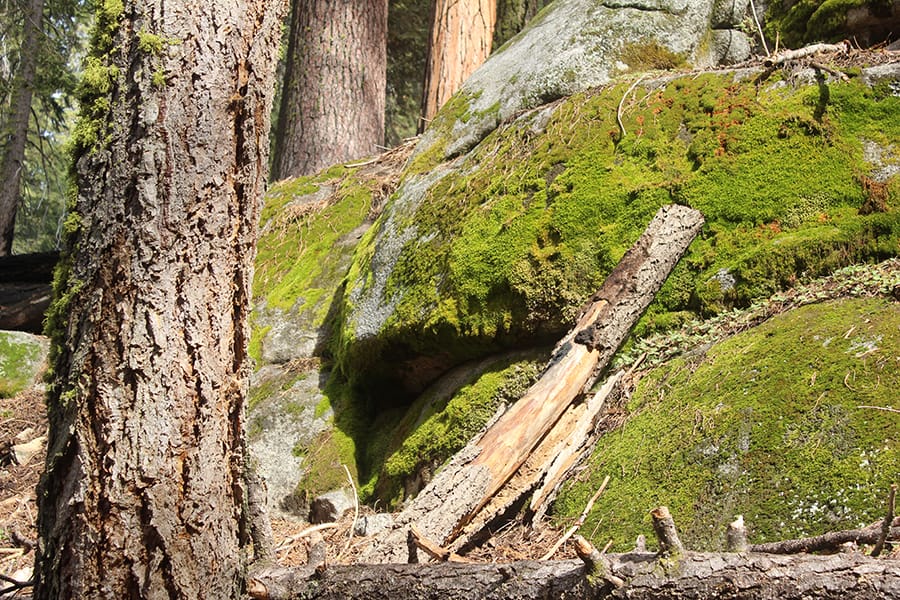 But my friends are already far ahead, out of sight. And so my time in the forest is made up of long, slow moments of reverie punctuated by short, frantic sprints to catch up with the others.

At the end of the trail stands the President, the second largest tree in the world by volume of its trunk and branches, estimated to be at least 3,200 years old. Unlike the General Sherman, the President has no fence around it. My friend walks right up to it and grasps its trunk.

Near the President are many others: Chief Sequoyah, and of course, the Senate, a group of sequoias clustered closely together. 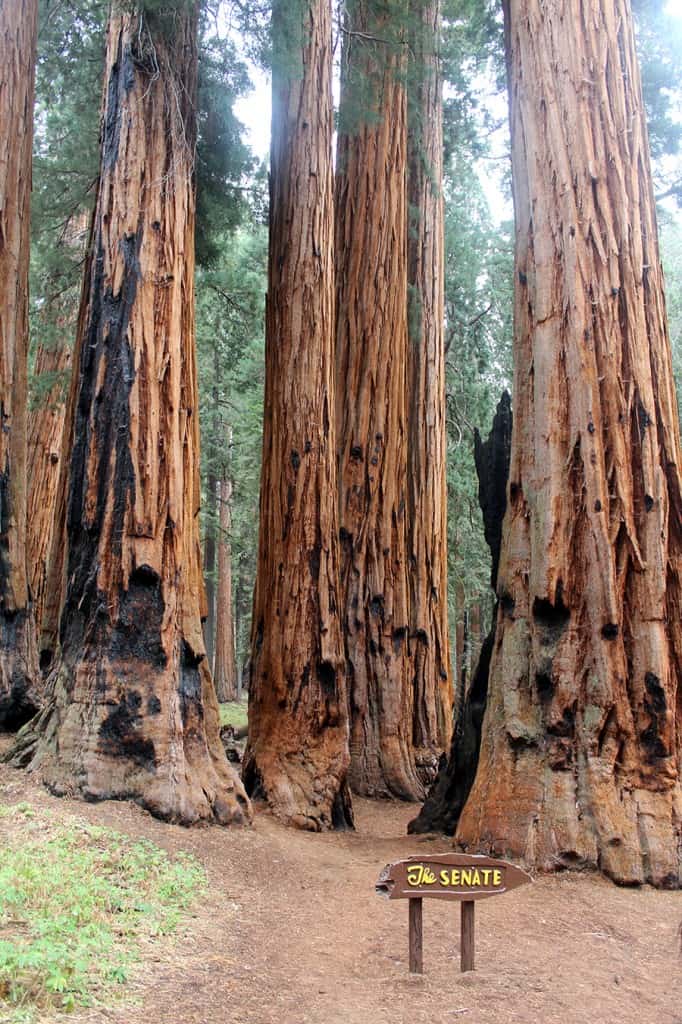 Past this governmental gathering is a tree graveyard of sorts. Blackened, burnt trunks lie strewn all over the ground, casualties of fires. 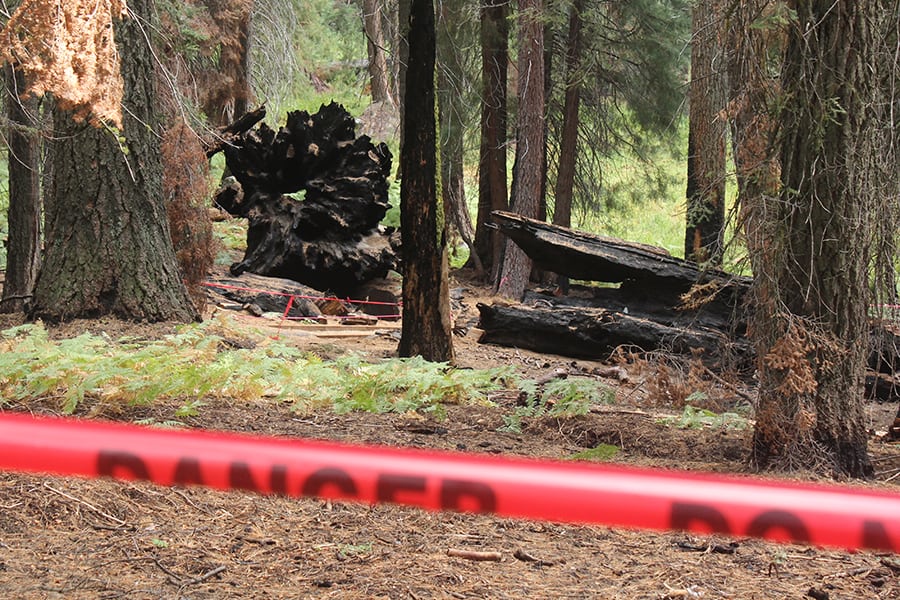 This is where the trail comes abruptly to an end.

We turn around and walk back to our car. Past the fire-scarred, blackened trunks; past the gathering of the Senate trees; past the dripping stream beneath the fallen log; past the rocks covered in bright green moss; past the largest tree in the world.

We walk in silence; nothing needs to be said.

As we near the end of the trail I wonder, briefly, if I might just stay here instead.

“In every walk with Nature one receives far more than he seeks.” -John Muir

You may have noticed all the quotes above are from John Muir. It’s my tip of the hat to the late, great author and conservationist, without whom Sequoia National Park, and many others, may never have come into existence.