9 min read
*Affiliate disclosure: I may receive commissions if you buy via the links below. As an Amazon Associate, I earn from qualifying purchases.
25 shares

Does anyone else find it strange that 1.4 million visitors flock to the famous Alcatraz Island every year to tour an old prison?

The one San Francisco attraction that everyone kept urging me to take my mom was Alcatraz, and I just didn’t get it. People spent years wishing to escape that place—why are we so quick to go there? But I decided to try it anyway.

We got to the Alcatraz tour ticket line around 2 p.m. on a Tuesday and waited for 30 minutes only to find that the next two tours were already fully booked. We bought tickets for the 3:50 tour and left to seek some shade from the unusually torturous San Francisco sun.

Before I continue with my review of the Alcatraz tour, here is some basic info for your visit:

Visitor Information for Touring Alcatraz: How to Tour Alcatraz

How long does it take to get to Alcatraz?

To get to Alcatraz, you have to take a ferry from San Francisco. The ferry ride takes anywhere from 12-15 minutes.

How long is the Alcatraz tour?

My mom and I spent about an hour and a half, but the National Park Service recommends you allot 2.5 hours. I went only to the prison, but there are other things you can see on the island.

Where can I buy tickets to Alcatraz Island?

How do I get to Alcatraz?

The ferry leaves from Pier 33, near Fisherman’s Wharf. I strongly suggest using public transportation anytime you go to San Francisco. We took a streetcar from the Ferry Building to Pier 33 for $2. You can also take a taxi. Or, if you’re insane, you can drive your car and try to find parking.

How much do tickets to Alcatraz cost?

There are also night tours and tours of both Alcatraz Island and neighboring Angel Island. Compare tours here.

Anything else I should know?

Wear sunscreen! Yes, SF can be foggy, but it wasn’t the day we went. I ended up getting a huge sunburn across my shoulders. Also, bring water. If you forget, they sell it on the ferry.

Now, on to my review of the Alcatraz tour!

The Ferry Ride and Steep Climb to Alcatraz

When we set out on our ferry to the island, I was able to set aside the feeling that touring an old prison was somehow creepy and morbid. The view is incredible from the boat. The prison stands tall and victorious on the island in front of you, while the famous Golden Gate Bridge towers over the glittering water to  your left. 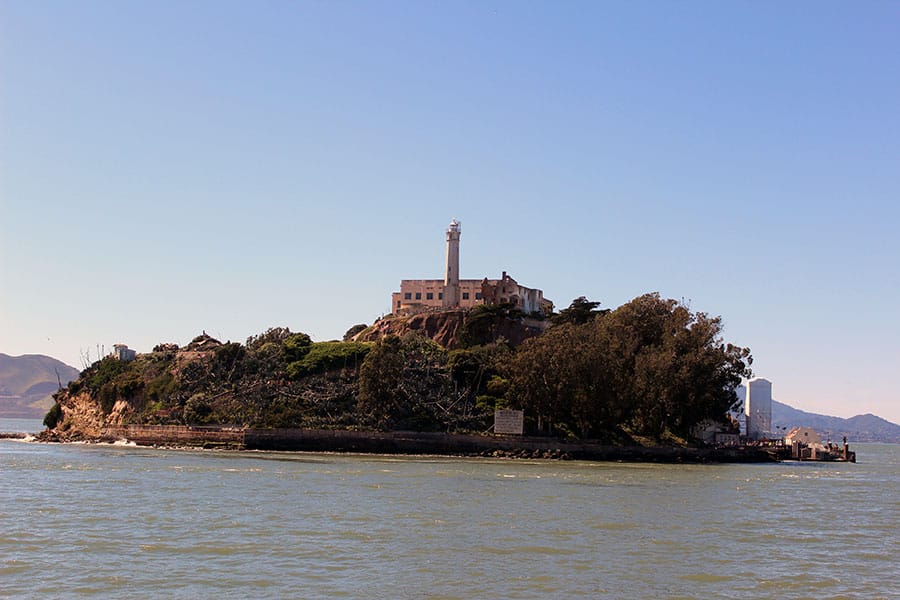 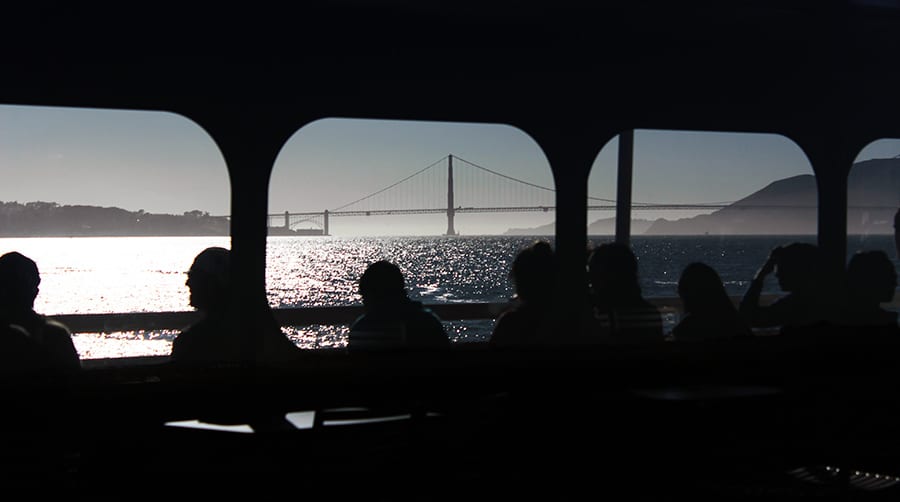 We arrived on the island to an even bigger and chaotic crowd than the one we had left at the dock in San Francisco. A park ranger stood in front of the crowd barking out orders:

“The climb is LONG,” she warned us. “It is steep and dangerous. If you have heart problems, be extra careful. And PLEASE watch your step!” 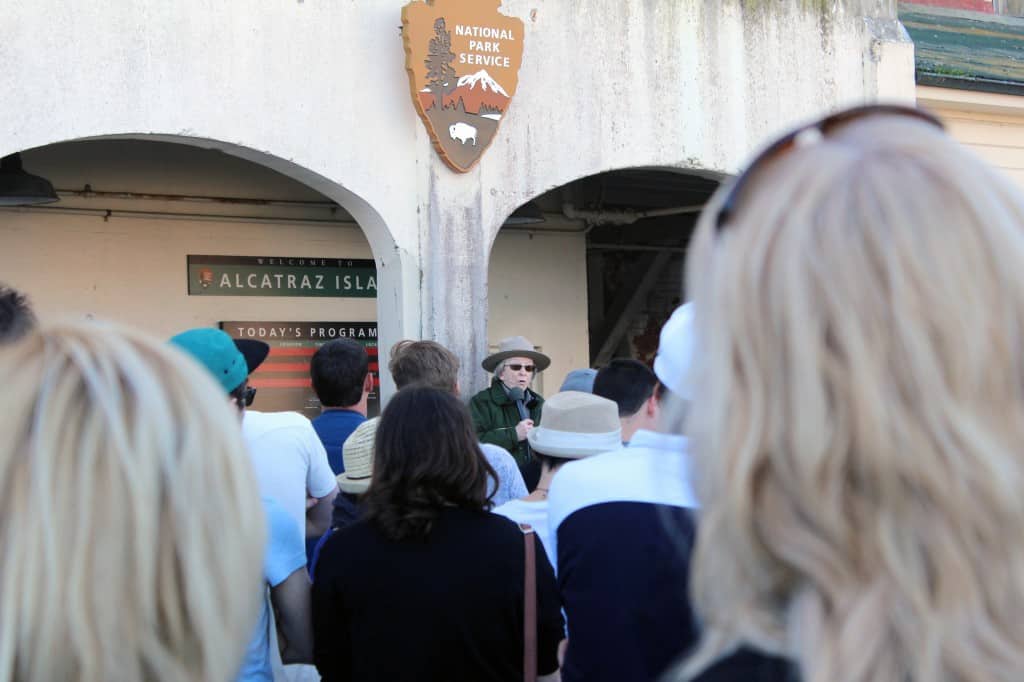 From the way she made it sound, I wondered if I could just turn around and take the next ferry leaving the island. I was dreading the ascent to the top of the hill, where the prison is located, but it really is NOT as bad as the park ranger made it sound. There is beautiful plant and animal life to see as you walk, and the views of the bay are spectacular. 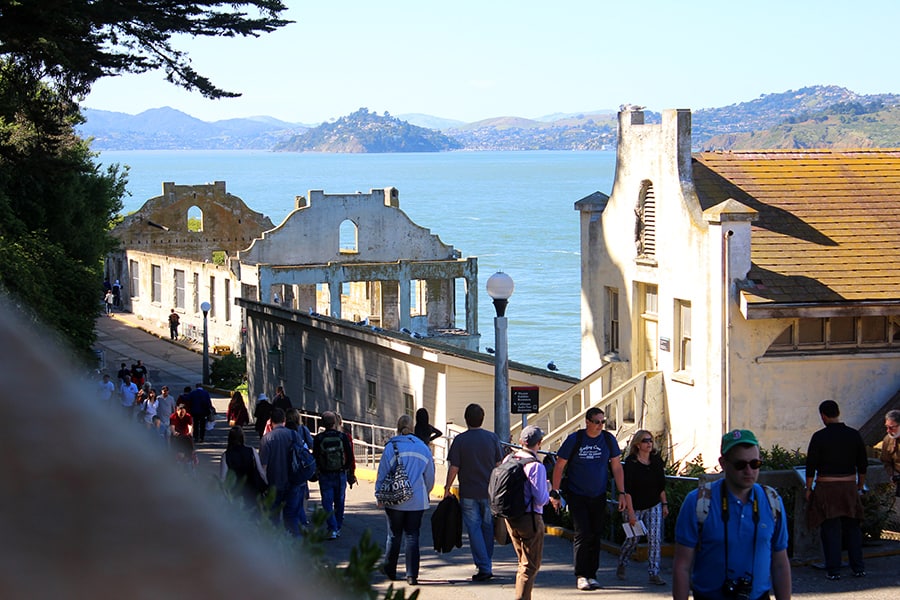 As we all filed into the cool prison building, a park employee handed us a headset and a controller to listen to the audio tour that is included in the admission price. I rolled my eyes. I dislike tours, and I especially dislike audio tours.

But I was pleasantly surprised. The stories were riveting. The audio tour includes interviews with people who were actually prisoners at Alcatraz. It goes to great lengths to bring you back to the actual scenes, with ambient noise underneath the voices of the prisoners telling you what they saw. It was haunting, at times. 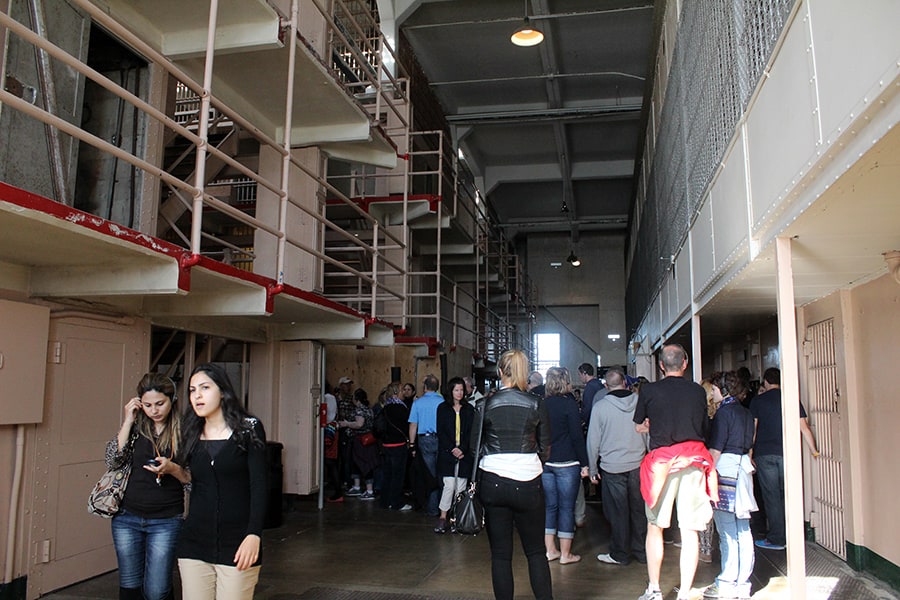 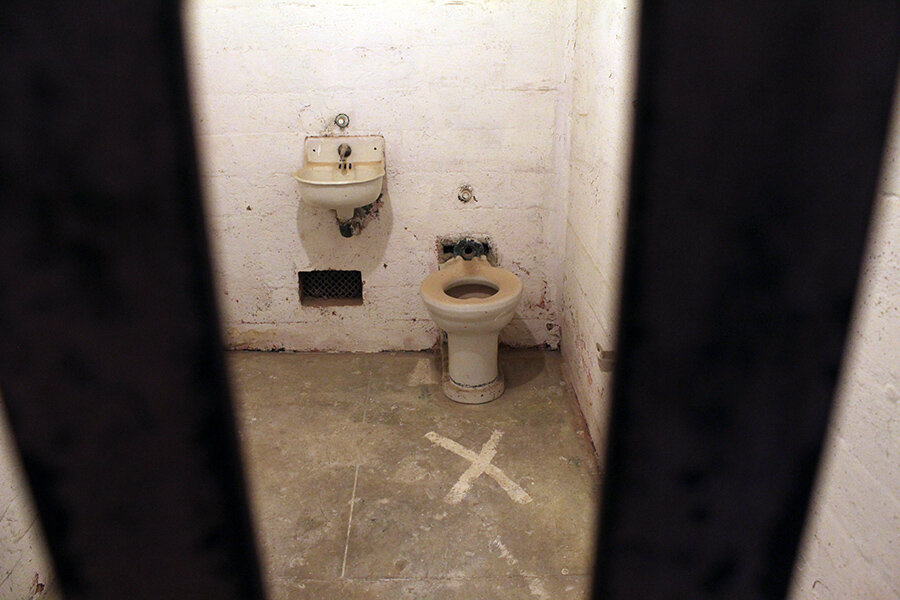 History of Alcatraz: More Than Just a Federal Prison

While Alcatraz is most famous for its time as a federal penitentiary for the country’s most hardened criminals, it’s been much more than that. It was first used as a military garrison (1850 – 1934), and it’s home to the West Coast’s first lighthouse (built in 1854). Alcatraz Island was used as a site for a federal penitentiary for only 29 years (1934 – 1963). After the prison shut down, American Indians from San Francisco inhabited it for about 19 months (1964 and 1969 – 1971) to protest federal policies. Now the island is managed by the National Park Service and has been designated as a National Historic Landmark.

Despite its rich history, Alcatraz is best known for the brief span of time it was used as a maximum-security federal prison housing some of the nation’s most hardened criminals, such as Al Capone.

Life After Murder: A Sobering Exhibit

“Why so much BAD in this world?”  -Hunter Tran

As usual, I got lost. The audio track tells you where to turn, where to look, and then it narrates. Somehow I made a wrong turn, and while the narrator was telling me about the recreation yard and the games the prisoners played, I found myself looking at an exhibit about murderers who turned their lives around.

The most poignant part of this exhibit was a wall that said “Life After Murder,” where visitors could write their reactions to the exhibit on a sticky note and post it on the wall.

I didn’t write anything, but I read almost all the notes.

The most striking one? One that appeared to be written by a child. It didn’t state an opinion, didn’t rail against the justice system or make some philosophic conjecture about the nature of forgiveness. No, it simply asked, “Why so much BAD in this world?” Kid, I think we all wonder the same thing. 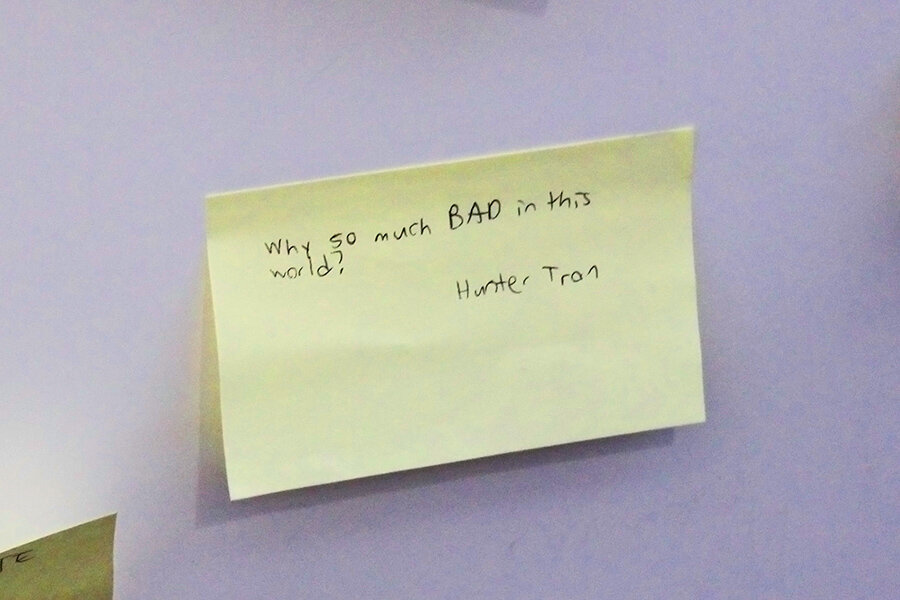 Throughout the entire tour, I couldn’t shake the thought that this wasn’t just another tourist attraction, that while we laughed, took pictures, and walked around freely on this sunny, warm day, people had been imprisoned here. People waited out years of their lives hoping to escape. People died here.

The audio tour took us past the cells used for solitary confinement, where unruly prisoners were punished by being forced to stay in pitch black rooms, seeing the light of day only once a week for showers and exercise. In my headphones, one prisoner told me of a game he would play to pass the time while in isolation: he would tear a button off his clothes, throw it in the air, and then search for it in the dark. Once he found it, he would throw it and begin the search all over again.

The narrator invited me to step inside one of the cells; I opted not to.

Was Alcatraz Truly an Inescapable Prison?

Something you’re probably wondering (or at least, I wondered): did anyone ever escape from Alcatraz? The widely-accepted answer is no. However, there are five people who tried to escape who have never been accounted for. Three of them were involved in the same intricate escape attempt, in which they created dummy heads to leave in their beds and fool the guards, used spoons to chisel a hole in the wall, climbed up the pipes inside the prison walls to the roof, boarded a makeshift raft, and were never seen again. Sound like the stuff of movies? Well, there is a Clint Eastwood film about it.

Savoring Freedom After Touring a Prison

“There wasn’t a day that went by that we didn’t know what the hell we were missing.”
–a former Alcatraz prisoner (excerpt from audio tour)

It is well known that Alcatraz’s location made it the perfect prison, as the frigid waters and steep cliffs are huge obstacles to escape. However, something I’d never thought about is the torture inflicted upon each inmate who was able to see beautiful San Francisco just 1.5 miles away, separated only by water. In the audio tour, a prisoner mentioned that on New Year’s Eve, they could all hear the music and laughter coming from people partying on the boats anchored in the water just outside their prison cells.

The first breath I took after emerging from the cold, dim prison felt like the best breath of air I’ve ever taken. After all, San Francisco, for me, was but a short ferry ride away.

As I rode atop the ferry deck on our return to San Francisco, I looked into the frigid waters and thought of the three men who tried to cross those waters to escape the island. I wondered if they’d made it to shore alive. 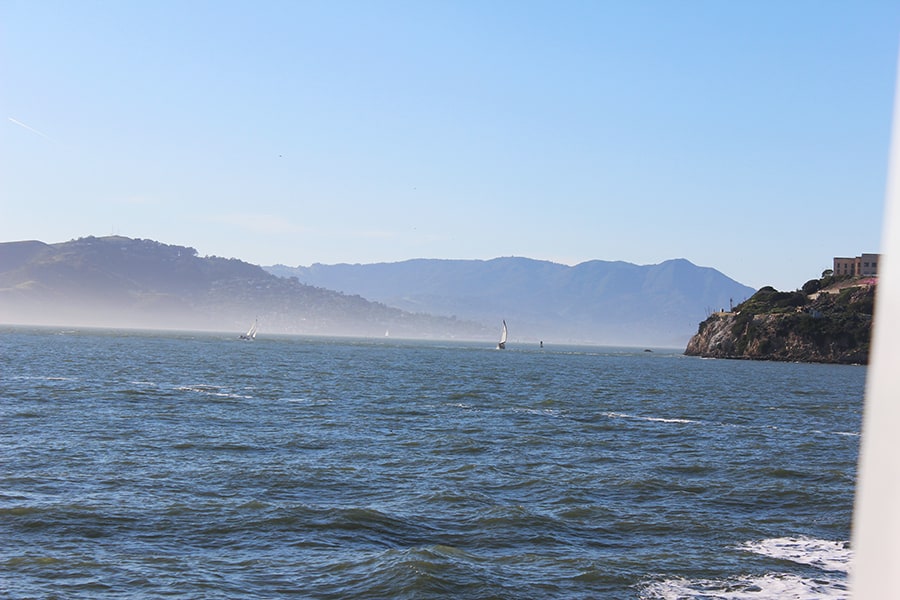 Though I still don’t understand why, of all the places in San Francisco, Alcatraz is the one to visit, I’m glad I did, if for nothing more than to be grateful for my freedom.